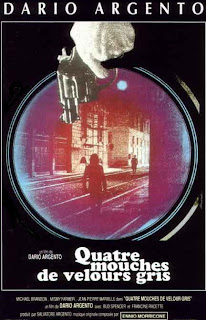 ...aka: Four Flies on Grey Velvet
...aka: Four Patches of Grey Velvet
...aka: Four Velvet Flies, The
...aka: Quatre mouches de velours gris
Directed by:
Dario Argento
Pretty good giallo from Argento; part of his "animal trilogy" along with THE BIRD WITH THE CRYSTAL PLUMAGE (1969) and THE CAT O' NINE TAILS (1971). While not quite as good as Bird, it's at least on par with CAT in my humble opinion. Michael Brandon stars as Roberto Tobias, a young man trying to make end's meet as a drummer for a struggling rock band but ably supported by his emotional wife Nina (Mimsy Farmer), who has collected a healthy inheritance. One night Roberto decides to confront a mysterious man who had been stalking him for a week. He chases the man into an abandoned theater, accidentally stabs him and knocks his body into an orchestra pit. Roberto flees the scene of the crime but someone wearing a cherubic mask is watching him from one of the booths and snaps a few pictures of him committing the crime. Later on, Roberto finds himself being stalked by the blackmailer, who keeps leaving incriminating pictures inside his apartment. The blackmailer is also going around murdering people Roberto knows. What does the psycho want from him? And what gives with all of those strange dreams/premonitions Roberto keeps having that involve a public execution (a beheading to be exact)?

There are plenty of suspects and victims to go around, including an older maid named Maria (Marisa Fabbri) who is secretly in love with Roberto, Nina's sexy relative Dalia (Francine Racette) who comes to stay with them, a couple of nosy neighbors and several guys who hang out near the home (spaghetti western regular Bud Spencer plays one of them, who goes by the name "God"). Roberto hires flamboyant (i.e. flaming) private eye Gianni Arrosio (Jean-Pierre Marielle) to try to get to the bottom of things. Professors at a local university also employ an interesting technique to try to catch the killer that has something to do with catching an imprint on the cornea; the final image seen by one of the victims before dying. In this case it happens to be four flies.

Based on a story by Argento (who scripted), Luigi Cozzi (who also plays a couple of tiny roles here) and Mario Foglietti, this is bit slow going at times but has enough twists and turns to keep giallo fans interested for the most part. As expected, there are lots of stylish sequences, some great camerawork and some interesting camera placements (including one inside a guitar). Most of the performances are decent enough (though a few seem like they'd rather be elsewhere), and the Ennio Morricone score is exceptional (the end theme is especially haunting). Unfortunately, this film is the hardest of Argento's genre pictures to find. It was never released to video here, there isn't a current R1 DVD release (though the film has been in several other countries, including Germany) and the Luminous Film & Video Wurks release that I watched is an ugly washed out print of the film with very bad sound. I may boost the rating a full point if a nicer print is ever released because this is a pretty decent effort overall.
★★1/2
Posted by The Bloody Pit of Horror at 10:32 AM