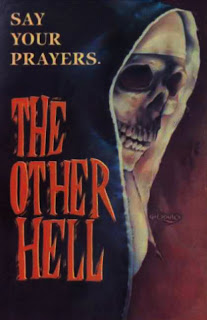 Occasionally gruesome, sometimes tasteless and pretty entertaining nunsploitation terror from Italian schlock shock guru Bruno Mattei, who directed under the name "Stefan Oblowsky" and also co-wrote the original story with scriptwriter Claudio Fragasso. Mad, seemingly possessed nuns are butchering other nuns in a convent, leading to a wave of panic and hysteria. Seeking some help, Father Inardo (Andrea Aureli) is called in to try to cleanse the convent and rid it of demonic forces, but his efforts prove futile and he is engulfed in flames before he can complete his task. Feeling drastic measures are needed, an unorthodox young priest/investigator named Father Valerio (Carlo De Mejo) is drafted to get to the bottom of things. A self proclaimed "ecclesiastic detective," Fr. Valerio begins investigating the murders, scouring the convent for clues and going through the nun's personal belongings looking for some reasoning behind the senseless slayings. Initially doubtful that demons are actually involved, he senses something is a little off with stern and overprotective Mother Superior, Sister Vicenza (Franca Stoppi), who tries to keeps her fellow sisters from talking, seems to be hiding something and refuses to let anyone get near the attic. Is it indeed a case of possession or are the nuns just finding therapeutic new ways to deal with their repression? The explanation behind it all, surprisingly, isn't bad, and this movie is far more competent than most of Mattei's other films.

Even though it drags from time to time, L'altro inferno still has many things going for it. First off, the performances are pretty good. Stoppi, who has a very expressive, somewhat sinister looking face, gives the standout performance as the secretive head nun. De Mejo is also tolerable as the hero and all of the smaller roles seem to be done with some skill. Secondly, there's some imaginative set design inside the convent. One corridor is lined with hundreds of skulls, leading up to a secret alchemist's lab (?) complete with a fiery cauldron, bubbling test tubes, beakers and coffins. Upstairs is another strange room full of cobwebs and angelic-looking mannequins hanging from the ceiling. Definitely not the same kind of art direction you typically seen in these kind of films. Another memorable thing about this one are some truly tasteless touches, notably when a crazed nun cuts the vagina (!) out of a corpse. A newborn baby is even tossed in a pot of boiling water at one point. The themes here cover most of the bases of religious-themed horror; possession, stigmata, the birth of the Antichrist... Surprisingly, there's almost no nudity (the only nudity is from a corpse). The score by Goblin is mostly lifted from the previous year's Buio Omega (aka Beyond the Darkness), which also starred Stoppi.

Saw this in 1985 as "The Guardian of Hell." Five people were in the theater, three walked out in the first 5 minutes. The rest of us had a great time throwing popcorn at the screen and enjoying the shlock.