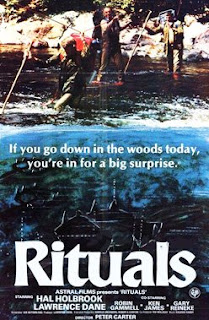 ...aka: Creeper, The
...aka: Ils était cinq
...aka: Rituals, il trekking della morte
Directed by:
Peter Carter
.
Every year, five doctor friends organize a vacation somewhere so they can get out an enjoy nature. This year it's a fishing trip deep in the Canadian wilderness. Trip organizer D.J. (Gary Reineke) provides all the provisions and has an airplane fly them 15 miles from the nearest town and orders the pilot to come back in six days to get them. After being dropped off at their location, the guys talk, fight and enjoy a few beers by campfire, but someone seems to be watching them. The next day while they're sitting on a dock fishing and dipping their feet in the water, someone sneaks into the campsite and steals their boots. D.J. told them in advance to bring extra shoes, but no one listened to him. Now he has to trek back through the woods to a dam (that they see is located nearby on their map) to try to get some shoes for his friends. D.J. takes off leaving the other four there, but isn't back to camp by nightfall. That same evening someone leaves a strange and horrifying effigy with a freshly-killed deer's head centerpiece and snakes. The next day while the guys are taking pictures, a tree branch full of angry bees is thrown in their direction. The guys panic and run. All but one of them fall down a hill and into the river to dodge the swarm of bees. The fourth, Abel (Ken James) mysteriously ends up dead. The other three guys; compassionate and level-headed war vet Harry (Hal Holbrook), reactionary and self absorbed Mitzi (Lawrence Dane, also one of the producers) and D.J.'s alcoholic gay brother Martin (Robin Gammell), decide they need to try to get to the safety of civilization as soon as possible.
.
The three make their way up river looking for the dam as tensions flare, suspicion falls on each member of the group and crucial decisions must me made, particularly after one of them steps on a bear trap hidden in the rapids, becomes seriously wounded and must either be carried for the rest of their journey or left behind to die. Whoever is hunting them down also leaves some clues behind, including military medals and some X-ray scans dating back to the 1940s. It's a good movie (with more than few echoes of the 1972 classic DELIVERANCE); professional cast, decent characters, great Canadian scenery, some plot surprises, a few well-placed shocks and a menace wisely kept off screen until the very end of the film, though the resolution itself has been seen before.

Unfortunately, the movie seems to be in the public domain right now and no one has stepped in to release a decent copy. Mill Creek's DVD release is obviously taken from the censored TV print (which was released in 1980 under the title THE CREEPER) and though much of the film takes place in the daytime, the night scenes (including the finale) are so dark they're hard to make out much of the time. Some of the violence has also been removed. About 11 minutes in total are missing from the version I saw. Regardless, it's well worth your time.
★★1/2
Posted by The Bloody Pit of Horror at 5:40 AM