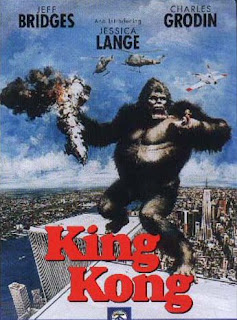 ...aka: King Kong: The Legend Reborn

Directed by:
John Guillermin
Sometimes bigger isn't better. The 1933 original (which I'd give a perfect 10 to if I rated it here) remains one of the greatest fantasy/horror/action films of all time. This campy "remake" from producer Dino De Laurentiis cost "25 million" dollars (23 million over the budget of the first one) and is inferior in every possible way. It's basically the same old Beauty and the Beast style story all over again, except with dialogue and characters written to please 70s audiences (but now seems hopelessly tacky and dated), the World Trade Center subbing for the Empire State Building and Willis O'Brien's charming stop-motion effects work replaced by a much-touted giant 40-foot-tall mechanical ape designed by Carlo Rambaldi that cost nearly 2 million dollars to construct and 20 people to operate and yet is barely even used in the film. The giant ape is actually mostly played by Rick Baker in a monkey suit frolicking amongst miniatures! Jessica Lange, a former model making her film debut here (she got the part after both Barbra Streisand and Bo Derek passed on it), plays the damsel in distress (an actress) who is saddled with such groan-worthy lines as "Put me you down you male chauvenist ape!" She (shipwrecked) is picked up by a boat and, along with pseudo-hippie counterculture scientist/idealist Jeff Bridges (her other love interest), smug oil company president Charles Grodin and crew, discover the giant monkey on uncharted Skull Island, somewhere off the coast of Indonesia. The same things basically happen as they did in the original, with Kong eventually being brought to New York City to be exploited, escaping, facing off with the army and reaching out his 1,650-pound, crane-operated mechanical arms toward his lady love for the tear-jerking conclusion.
.
Thanks to a huge advertising campaign, promotional tie-ins and Kong-related mechandise (lunch boxes, posters, cards, etc.) sales, Kong became a big "event movie" before they were all that common (it would be another year before STAR WARS was even released) and was a huge box office hit, raking in over 80 million dollars worldwide during its initial theatrical run. It was also nominated for three Academy Awards (for sound and cinematography) and ended up winning one for "special achievement" for the special effects, which caused a lot of controversy at the time and even prompted several academy members to actually quit in disgust.
.
It was scripted by Lorenzo Semple, Jr., whose work in lower-key, lower-budgeted fair - such as the black comic gem PRETTY POISON (1968), which has rightfully become a cult favorite over the years, and the great but seldom seen psycho-thriller DADDY'S GONE A HUNTING (1969) - is far superior to his writing here. The cast includes Rene Auberjonois as Grodin's assistant, John Randolph as a captain, Julius Harris, Jack O'Halloran, Dennis Fimple, Ed Lauter and the return 50s monster movie star John Agar as a city official. Turning up in uncredited bit roles are Forrest J. Ackerman (who can be seen fleeing Kong) and Corbin Bernsen as a reporter. Future porn actress Kelly Nichols was Lange's stunt double.
.
De Laurentiis also produced the awful follow-up KING KONG RETURNS in 1986, and Peter Jackson did his own Kong remake in 2005.
★★
Posted by The Bloody Pit of Horror at 10:49 PM