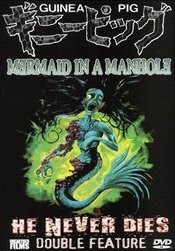 ...aka: Guinea Pig: Mermaid in a Manhole

Directed by:
Hideshi Hino
Entry #4 in the notoriously gory Japanese series (my favorite of the four I've watched thus far) centers around a lonely, reclusive painter and art teacher named Mr. Haydashi (Shigeru Saiki), who has just recently lost his wife. His "special place" is down in the sewer. It used to be the site of a river before the area became developed, and now it's just a dark, quiet place where the artist can find inspiration for his paintings, as well as reflect on his own childhood. On one such trip down below he discovers a beautiful mermaid (Mari Somei), who he once saw there as a child. She became stranded once the river dried up and is now weak and injured. He brings her back to his home where she insists it's his mission to paint her. She also has severe abdominal pains and develops some kind of growth around her stomach, which seems to be quickly spreading across her body and occasionally starts spurting out massive amounts of blood. Medicine doesn't seem to help, and neither do generous portions of raw fish. Before long, the mermaid's entire torso is covered in tumor-like growths. She instructs the painter pop them with a razor blade, and different color liquids (orange, purple, blue...) ooze from each one, which he uses to paint with. Nothing seems to help ease the suffering and before long the mermaid degenerates into a boil-covered mess, with soars constantly oozing blood and worms as she thrashes around in a blood-filled bathtub. Meanwhile, a nosy downstairs female neighbor starts snooping through the artist's trash...

Unlike the other GUINEA PIG flicks I've seen, this one seems more like an actual movie than just an excuse to disgust the audience, though it also does that quite well. There's an actual plot-line this time with some depth to the story and characters. The cinematography and shot compositions are far more sophisticated, colorful and artistic than anything seen in previous entries; including nice-looking shots of the manhole cover being removed flooding the darkness with bright blue light, the artist covered with red blood holding a razor in front of him reflecting green light, etc. It also has a pretty good final twist to the story that I didn't see coming at all. The story and artistry both combine to give this film some genuine mood. There's something oddly captivating about the mermaid despite her repulsive continual decomposition and it all takes on the feel of a tragic, doomed romance. While the first two films used paper thin plots to center the gore scenes around, and the third didn't take itself seriously at all, this one shows some genuine effort to cut it as an actual movie. And for the most part, it succeeds.

As far as gore goes, series fans will not be disappointed. There are plenty of repellent scenes as the mermaid starts to literally fall apart and the special effects are excellent. There are even some scenes that combine the dramatic with the grotesque, such as when as the artist rubs the back of the mermaid while she starts barfing up bloody globs of worms onto the floor. The two lead performances aren't bad at all, and this is far more entertaining and intriguing a film than the sequel title may suggest.
★★★
Posted by The Bloody Pit of Horror at 8:10 PM