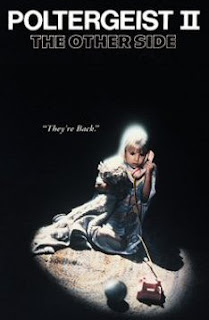 Directed by:
Brian Gibson
Julian Beck, in a wonderfully creepy performance as a ghostly, sickly-looking preacher named Kane, highlights this otherwise standard sequel. Sure it's a big comedown from the original, but it's still passable, especially sizing it up against the next installment. The same family (dad Craig T. Nelson, mom JoBeth Williams and kids, minus teen daughter Dominique Dunne because she was murdered in 1982) and the same psychic lady (Zelda Rubinstein) are back, as some nasty ghouls show up wanting to take cherubic Carol Ann (Heather O'Rourke) to "the other side." Steve Johnson FX scenes include a "vomit creature", when dad drinks a bottle of possessed hooch and throws up a tequila worm monster (?!) and killer dental braces (oh yeah, that earns another "?!" don't it?). There's a flashback showing cult followers being sealed up in a cave. Beck and Will Sampson (the latter as a friendly Indian who tries to help the Freeling family and naturally knows all about magic and evil spirits because Indians always know all about that kind of stuff) were both dead before # 3 came out. Jerry Goldsmith did the music again, and Geraldine Fitzgerald has a supporting role as the grandma.
Score: 5 out of 10
Posted by The Bloody Pit of Horror at 11:45 PM