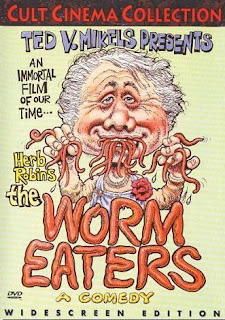 Directed by:
Herb Robins
You won't believe this dumb regional concoction, starring, written and directed by former R.D. Steckler movie regular Herb Robins! He plays demented "worm rancher" Herman Umgar, a grimy, gray-haired, club footed (German?) hermit who lives in a shack out near a California lake with his beloved pet worms. Herman sings to the worms, gives them each their own name, builds a worm house and cooks and eats them. A corrupt mayor and city counsel members try to re-zone the lakeside and cheat Herman out of his land to build a resort, so he uses his slimy friends for revenge. For some reason the worms, when eaten, can turn people into human/worm creatures that look like people crawling around in shaving cream covered sleeping bags. Three worm men with echo voices demand that Herman create mates for them, so he's also forced into feeding (obnoxious) women food laced with worms, then keeping them caged up in his house where they squirm around making high-pitched beeping sounds.
Typical dialogue, in this case spoken by a big-breasted black captive, is "Please! Don't give me any worms! I'll do anything you ask!" Things culminate with the worm men and women living happily ever after and Herman becoming road kill. I'm assuming THE WORM EATERS was meant as a comedy, but has terrible overacting and the intentional humor isn't all that funny. The selling points here are a cameo by producer Ted V. (ASTRO-ZOMBIES, THE CORPSE GRINDERS) Mikels arm wrestling, and loads of disgusting, unfaked close-ups of people chewing on and eating real, live worms. Yeccch! Priceless kazoo-backed theme song ("You'll End Up Eating Worms"), though. Trivia Note: Lani Silver, the daughter of cult actress Tura Satana (of FASTER PUSSYCAT! fame), appeared uncredited during a party scene.
Score: 1 out of 10
Posted by The Bloody Pit of Horror at 5:51 PM

never saw THE WORM EATERS -- read a review of it in the early '90s that grossed me out. tried watching BRAINSUCKER and haven't gotten through it yet (attempt #5).

Ha I had the same exact experience with Brainsucker. I had it on my computer for 2 whole years before I could muster up the strength to finish it!