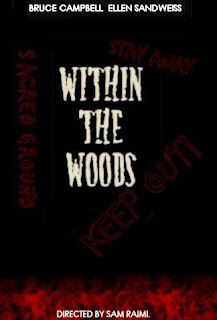 Directed by:
Sam Raimi
Before THE EVIL DEAD (1981) came this "concept" movie which is nearly the same exact plot aside from the fact it's missing the "Book of the Dead" stuff and drops one of the characters. It runs only 30 minutes and since the budget is virtually nonexistent, it's naturally not nearly as polished as the later films and has that "home movie" feel to it. Some slight changes were made here and there, but elements from this, as well as whole scenes, ended up making their way into the first two Dead films, so it's certainly a worthy watch for fans of the series. Unfortunately, the copy I viewed was in terrible shape. It looked like it has been copied about 50 times, was too dark and had a bunch of picture rolls. I'm not sure if all the available prints are in the same condition or not. Maybe I just got a bad one. Two couples are staying at a little white house in the country (as opposed to the rustic looking cabin used later). Bruce (Bruce Campbell, also an executive producer) and Linda (Ellen Sandweiss) decide to go outside and roast hot dogs. He explains that the property rests on an ancient Indian burial ground that's rumored to be cursed. While digging around in the dirt, Bruce uncovers a few ancient artifacts, including an Indian dagger. Linda goes to sleep on a blanket. When she wakes up, Bruce has disappeared. On the way back to the house she finds a mutilated corpse of what's presumed to be Bruce and is stalked by floating spirits. These shots are basically the same ones utilized in the later movies, complete with similar sounding music. After Linda arrives at the house, Scotty (Scott Spiegel) decides to go out looking for Bruce. While he's gone a demon possessed Bruce attacks. He grabs the other female (Mary Valenti) and stabs her in the neck, then comes after Linda.

The parts I remember the director reusing aside from the same style of camera-work and music include a demon hand mashed in a door, one of the characters accidentally getting stabbed and then blocking the doorway as someone frantically tries to shut it, a presumed dead corpse suddenly rising into frame from the floor, a demon getting hacked to a bloody pulp on a couch and, of course, the legendary line "Join us." Some aspects near the beginning clearly seem influenced by the original TEXAS CHAINSAW MASSACRE, such as use of tinny music and when Linda trips, falls down and then looks up to see a mangled corpse. The makeup effects from Tom Sullivan are fairly good, the acting isn't bad and there's enough imagination going around to see how Raimi was able to get investors involved in helping back the feature length version a few years later.
★★
Posted by The Bloody Pit of Horror at 5:54 PM