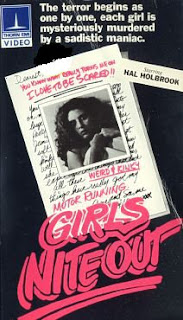 ...aka: Girls Night Out
...aka: Scaremaker, The
Directed by:
Robert Deubel
A killer, dressed as a basketball team's mascot (a bear) prowls around campus killing sorority girls on a scavenger hunt. I did see this one about five years ago and remember almost nothing about it aside from the ludicrous identity of the "mystery" killer, so I guess that speaks volumes right there. I'll lay off of a rating until I watch it again some day. It was filmed on location on the Ohio State U. campus in Columbus, Ohio.
Score: n/a
Posted by The Bloody Pit of Horror at 8:04 PM