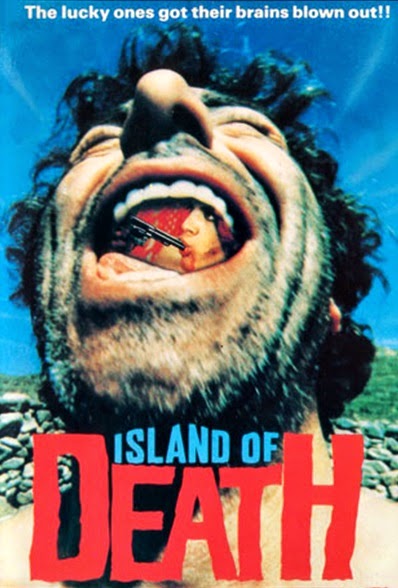 
I don't care how many countries they claim it was banned in, this Greek "shocker" (a video nasty in the UK) didn't really blow me away. It's an entirely pointless exercise in being disgusting, sleazy and tasteless, which gives it some exploitation cred off the bat, but those looking to be seriously grossed out or shocked might be surprised at how blasé this whole affair is. To me, it was silly, repetitive and overblown; occasionally amusing, occasionally a little gross or offensive, but in the long run not really worthy of its cult reputation. Yet some genre critics apparently find reason to sing its praises by claiming it's some brilliant "morality play." And that's simply because the sick, sadistic lead characters finally get what they have coming at the very end. Using their own criteria, you could apparently show the same group of people a film that featured nothing but extended rape scenes for 99% of the running time and end it by castrating the killer and they'd have their next "deep" classic. Even the director / producer / writer himself cynically admits that it was made with no purpose or deeper meaning in mind, other than making money. Seeing how there's not even the slightest hint of substance in the entire film, I'm apt to believe him and furthermore apt to think writers for some of the more popular genre publications are just grasping at straws to turn something minor into something substantial. They should have just admitted "Hey, I'm the type of person who loves seeing nudity, sex, gore, bad taste and goat-fucking!" Hell, I'll admit. I don't mind seeing any of those things either, but what I do mind is seeing a film that doesn't live up to its own hype.

Island of Death centers around a good-looking, sexually-active young couple (Robert Behling and Jane Ryall) who also happen to be brother and sister and get their kicks torturing, degrading and killing “sinners” on a picturesque Greek island. Victims are crucified, gays are killed for, well, being gay and the sister welcomes getting raped by some dirty hippies. When she's too tired to put out for her brother later on, he simply wanders out into the courtyard, fucks a goat and kills it. Jessica Dublin (Toxie’s mom in the Toxic Avenger sequels) plays a wealthy old bat who likes being pissed on during sex and is decapitated by a bulldozer. There's an attempt at an ironic ending when the duo run into a perverted shepherd, but by then it's a little too late to strive for any kind of honest subtext. The acting and dialogue are both terrible, but the scenery and cinematography are both surprisingly good, making this OK as a Greek travelogue. In spite of all the incest, bestiality, nudity, kinky sex and super-sick content, it actually attempts to come off as quirky, light and breezy; an attempt partially ruined by the dull performances. Personally, I thought the upbeat tone was almost a mild plus and gave the movie a slightly campy feel, even though it takes the edge away from some of the more shocking stuff.

This film never made the home viewing format in America until Image released the uncut DVD in 2003 but it *may* have played in some theaters in a cut version called either A Craving for Lust or The Devils in Mykonos, released with the great tagline "The lucky ones got their brains blown out!" Many of the foreign video prints (including the UK release entitled Psychic Killer 2) are heavily cut. Other alternate titles include Cruel Destination, Island of Perversion and Killing Daylight. Director Mastorakis pretty much shrugs off the film during an interview on the DVD (which also includes three songs from the film). Right after this, all three stars - Behling, Ryall and Dublin - appeared in LAND OF THE MINOTAUR (1976 aka The Devil's Men), which was also filmed on location in Greece at around the same time.