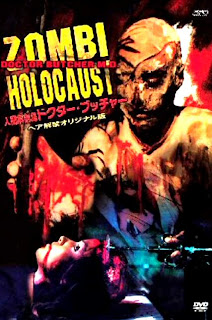 ...aka: Doctor Butcher M.D.
...aka: Dr. Butcher, Medical Deviate
...aka: Island of the Last Zombies
...aka: Medical Deviate
...aka: Queen of the Cannibals
...aka: Regina dei cannibali, La
...aka: Zombie 3
...aka: Zombi Holocaust
Directed by:
Marino Girolami
In New York City, a foxy blonde medical student (Alexandra "Cole"/Delli Colli, who also appeared in Fulci's NEW YORK RIPPER) teams up with a doctor (Ian McCulloch, who was also in Fulci's ZOMBIE) to investigate a series of murders, which leads the two of them and a handful of others to a secluded tropical island where a mad doctor (Donald O’Brien) is up to the usual mad doctor things. The plot is pretty silly and hard to figure out, but does manage to incorporate a magic dagger, a cannibal tribe, nude body painting, flesh-hungry zombies, brain transplants and plenty of super gory murders. A wide variety of good mutilation make-up effects are the films drawing true card, though most other exploitation bases are adequately covered. Originally released in the U.S. in a cut version called DOCTOR BUTCHER, M.D., this very bloody feature has now received a re-mastered widescreen print under this original moniker. It was one of the highest grossing Italian horror releases in America. The cast includes Sherry Buchanan, Peter O'Neal, Dakar and Walter Patriarca.
★★
Posted by The Bloody Pit of Horror at 5:16 PM