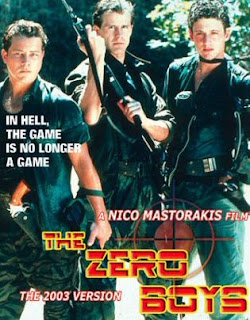 
Title refers to a team of three male survivalists (Daniel Hirsch, Tom Shell and Jared Moses) who win a war games competition and celebrate the victory by vacationing at a secluded country home with their girlfriends (Nicole Rio and Crystal Carson), as well as Kelli Maroney, who their team also "won" from the rivals. Their fun is disrupted when they find snuff videos, a head in the freezer, a torture chamber in the barn and that several killers (including Joe Estevez in an early role while he was still using the name "Joe Phelan") are lurking around the premises with crossbows, knives and machetes. All the horror clichés are accounted for including a car that won't start, a sudden rainstorm, lots of false alarms, heavy breathing POV killer shots, booby trapped woods, people wandering off by themselves even after finding dead bodies, etc. If there are any missing, it's not from lack of trying.


Pretty routine stuff, but some now well-known people got their starts here, including production co-ordinator Marianne Maddalena (who worked on many of the later Nightmare on Elm Street movies) and assistant art director Frank Darabont (Oscar-nominated writer / director of The Shawshank Redemption and The Green Mile). Some of the music is by future Oscar winning composer Hans Zimmer (The Lion King).

What's fascinating is that this movie came out before the Lake/Ng massacres happened. I saw this at the theatre and have had it on VHS and Disc, and still find it interesting to watch. I would give it a much higher rating than it is given here.