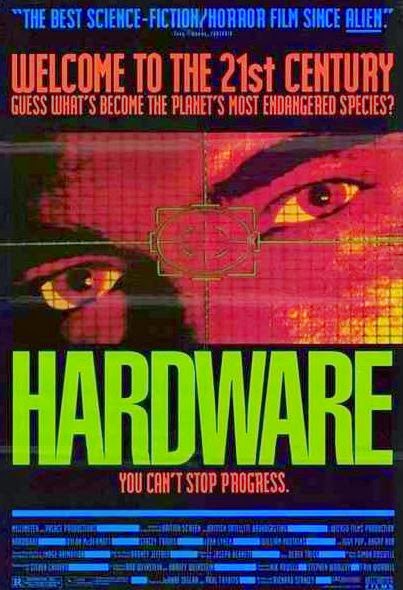 
Post-nuke Earth is a sandy, endlessly hot, orange-tinted wasteland overcome by pollution and radiation. A desert scavenger finds parts of a "M.A.R.K. 13" android partially buried in the sand, sells them to nomad Mo (Dylan McDermott), who in turn gives them to his red-headed artist girlfriend Jill (Stacey Travis). The robot regenerates itself into a heat sensing, merciless killing machine equipped with a buzz saw, drill, claws and machine gun that help it live by its motto, "No flesh shall be spared." Sci-fi/horror thriller is thinly-plotted, unpleasant and grim, but is professionally put together, well acted and slick, with one of Simon Boswell's best scores, and brilliantly bleak photography by Steve Chivers. Excellent make-up and robotics from Image Animation, as well. The film received a lot of publicity when it was released when it was threatened with an X rating. Some of the violence had to be cut for theatrical showings, but have been restored on video (which honestly never seems any worse than an R). It was based on the comic book "SHOK!" by Steve McManus and Kevin O'Neill, who apparently had to sue to get credit, and was filmed on location in London and Morocco. Iggy Pop and Motorhead's Lemmy, who both contributed to the soundtrack, have cameos.

Judging by this and Stanley's follow-up feature Dust Devil (1992), which involved a supernatural / demonic drifter lurking through a similar desert landscape, he has an excellent eye for detail and composition and excels at creating a bleak, desolate atmosphere and mood. However, both films are hampered by uneven, confusing and often muddled writing. Still, his films have that kind of visual style to command attention, so I'd recommend checking out at least one of these.