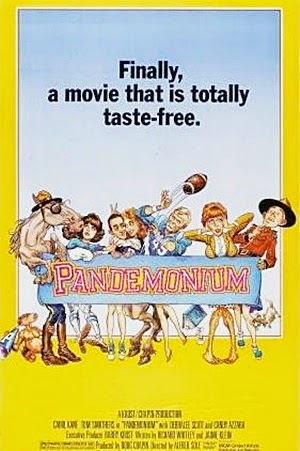 
I'm not a fan of these forced type of parodies at all, but this one's slightly better than most of the others made around the same time (Saturday the 14th, The Creature Wasn't Nice, etc.) as it was made by the oddball director of the moody murder-mystery / proto-slasher ALICE, SWEET ALICE (1976) and the tropical simian romance Tanya's Island (1980). Wide-eyed Candy (a very delightful Carol Kane) is among those at "Bambi's Cheerleading School," supposedly the last safe haven for rah rah gals and guys after a worldwide epidemic of cheerleader murders. That is until a gloved (a pair of fingerless motorcycle gloves are used!) psycho starts sticking their pom-poms down their throats and such. Yeah, this thing is full of sub-Airplane / Naked Gun gags, very few of which are funny, but you should be giggling through the finale as Kane runs around in her PJs discovering dead bodies and zapping things with red energy beams coming out of her eyes. The biggest hindrance is a PG-rating; which keeps this from covering all the bases established by the modern exploitative slasher film.


Tom Smothers has a fun supporting role as a Canadian Mountie (with Paul "Pee Wee Herman" Reubens as his assistant!) and Eve Arden (in her last role) and Eileen Brennan both have funny cameos. And check out the rest of the stellar comic cast - Debralee Scott and Candy Azzara as the other main cheerleaders, Judge Reinhold (a year before Fast Times at Ridgemont High), Miles Chapin (The Funhouse) and Marc McClure as the male cheerleaders, Tab Hunter as a football player, David L. Lander, Richard Romanus, Victoria Carroll, Jim McKrell, Donald O'Connor, Kaye Ballard, Edie McClurg, Alix Elias, Phil Hartman as a reporter, Pat Ast, John Paragon and Sydney Lassick.