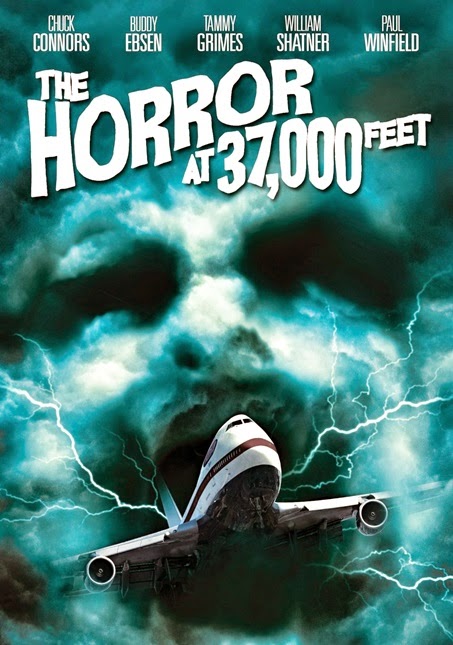 
One of the fun parts of covering horror movies of the 1970s is the generous amount of made-for-TV movies I get to view. Many of these, such as The Night Stalker films and Salem's Lot are good enough to rival theatrical releases being put out by the major studios at the time. On the flip side, others are so hopelessly dated, tacky and silly they now stand as great guilty pleasures. When you factor in the meager production values, the obviously rushed production schedules (many of the major networks put out at least one movie a week), the campy name value casts, the hideous fashions and the disaster movie-inspired plot lines, you're usually in for a pretty good time overall. This one seems to have been made in response to the mega-popular action-drama Airport (1970) and starts with a good solid 30 minutes of hilariously cliched "character development" before the horror elements even take flight. Strangely, I enjoyed the scenes of the cast just sitting around bitching, boozing, flirting, smoking ciggies (for some reason I love seeing people smoking on airplanes and in hospitals in these older movies) and talking about how miserable their lives are much more than I did viewing the wimpy horror scenes. It gets a little bland toward the midway point, but hell, who doesn't want to see Captain Kirk, Jed Clampett and The Professor from "Gilligan's Island" battling ancient evil forces on a cheap looking airplane set? I know I sure can't pass stuff like this up.


On a three floor cargo plane making a Trans-Atlantic night flight from Italy to the U.S., strange things are afoot. Bickering, wealthy couple Alan (Roy Thinnes) and Sheila (Jane Merrow) O'Neill decide to rent out the whole loading compartment to transport a huge church abbey back to the U.S. to decorate their home with. Unfortunately the church abbey is a cursed relic since it was removed from an ancient druid burial ground. There's talk about spirits communicating via Latin and reciting Black Mass and how the summer solstice has something to do with it and nonsense like that, but it basically boils down to the spirits being restless because they need a human sacrifice. More specifically, they need Sheila to sacrifice herself because she's a druid descendant. One strange ability of the druid spirits is that they can cause death by freezer burn if you get too close to them. Sadly, we only get to see a dog(sicile) and the flight engineer getting the ice death treatment. Oh yeah, and the plane becomes stuck in zero gravity; the engines are going but the plane isn't really moving forward once it reaches 37,000 feet. In other words, someone needs to come up with a solution and come up with it fast before they run out of fuel.

Unlike most other airplane movies there's only about 15 people on board, and that's including the five-person staff; pilot Chuck Connors, the co-pilot, the flight engineer and two stewardesses dressed in mini-skirts and go-go boots. There's also a shrewd Texas tycoon (Buddy Ebsen), an Asian fashion model (France Nuyen), a doctor (Paul Winfield), a little blonde girl, a female musician (Lynn Loring) and a ridiculous redneck western movie star (Will Hutchins). And who could forget William Shatner as the heavy-drinking cranky ex-priest who makes passes at the ladies, drinks from a flask, does his usual frequent pause dialogue delivery and must rediscover his faith to become the surprise hero. However, the cast standout is husky voiced Tammy Grimes as Mrs. Pinder, a woman stalking the O'Neill couple for removing the abbey because they desecrated a historic landmark. She unsuccessfully sued them in Italy so now she's being a total bitch by following them to America to sue them a second time... Unfortunately her plans are derailed once she becomes possessed by a druid spirit. I actually didn't even know she was possessed until the very end of the movie and thought she was just flat out crazy, but she's great and her facial expressions and dialogue delivery are priceless. Also with Russell Johnson and Darlene Carr.

I noticed these places had this on dvd Thanks