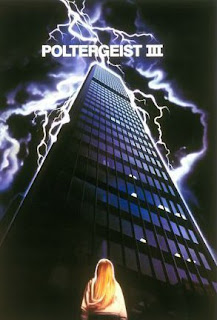 ...aka Poltergeist III: The Final Chapter

Directed by:
Gary Sherman
Poor lil Carol Ann (Heather O'Rourke) is still being pursued by other-worldly beings! Worse yet, she's forced to star in a sub-standard, unnecessary sequel! Trying to escape her past life of being every other malicious spirit's little bitch, our spritely supernatural phenomenom magnet has moved to a Chicago high-rise apartment building to live with her bickering uncle (Tom Skerritt) and aunt (Nancy Allen). Well, guess who shows up out of nowhere to make her life even more miserable? Why Kane the creepy preacher (Nathan Davis, taking over for the late Julian Beck) and a host of spirits out to possess and kill, of course! Well, possess and kill about as much as the PG-13 rating will allow. Oh yeah, and Zelda Rubinstein is back too as whiny psychic Tangina, probably because she's impossible to cast in anything else. Teen daughter Lara Flynn Boyle (in her film debut) is the victim of possession and tricks her boyfriend into an empty elevator shaft during one of the more enlightening moments.
That the characters are mostly unlikable, there's almost no humor and nothing remotely resembling originality occurs at any time, are just three of the factors that kill this entry dead. It failed at the box office and the series wouldn't rear its ugly head again until about ten years later, if you want to count the completely unrelated series Poltergeist: The Legacy, which just deals with hauntings in general. Dick Smith's FX work is passable, as is the score from Joe Renzetti (who took over for Jerry Goldsmith). O'Rourke died four months before this film was released. Expect a remake eventually.
Score: 2.5 out of 10
Posted by The Bloody Pit of Horror at 11:35 PM