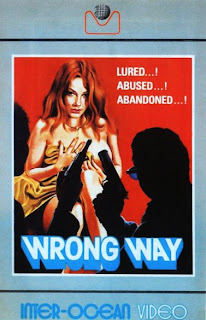 Directed by:
Ray Williams
Time for more hippie era exploitation. A bunch of middle aged scumbag losers are hanging out in the woods bitching about STDs and running out of booze and drugs. The leader sends two of his buddies into town to get some more beer and a couple of “dates.” Meanwhile, level-headed teen Kathy Hendrix and her more skiddish friend Nancy Newbauer take a wrong turn and become lost in the woods. Just when things can’t get any worse, their car breaks down. Oh wait, things can get worse. Guess who they hitch a ride from? Yep, the two guys looking for “dates” for themselves and their drugged-out sex predator buddies. The guys claim they’re geologists and will bring the girls to a portable phone to get them into their jeep. Back at home base, the other guys have just completed a pot sale with some bikers, which leads to one guy toking on a joint while fantasizing about gambling and a nude woman in a sequin-covered hat rubbing herself. One of the bikers is named Ziggy. He likes to eat raw eggs and doesn’t get along with Crabs, you know, the guy with crabs who won’t stop digging at his crotch. That’s as much character development as you’re gonna get here. The other guys return with Nancy and Kathy, who are promptly yanked out of the vehicle and assaulted. Amusingly, the three pot-selling bikers aren’t willing to participate: “Hey man, we don’t mind some crazy balling, but to hell with getting mixed up in rape and kidnappin; a little too heavy for us." Hell's Angels they ain't.

After the bikers leave, the “fun” begins. Kathy and Nancy are stripped naked, slapped around, have their hair pulled and forced to sniff each other’s crotches (!) before having a poisonous snake rubbed on their bodies. Then we get what could easily be the most gratuitous gang rape scene on record. It’s over ten minutes long and goes through about ten different positions as the girls wiggle around, beg, plead and scream. Strangely, all I could do was laugh even though, you know, rape isn't usually funny but it is when it's this badly choreographed. After the four hippie sleazeballs have their way with the ladies, they give the girls the bird and join in on a group “Fuck you” before speeding off. The girls get dressed and then wander off into the woods looking for help. “What a terrible thing they did,” says one in a monotone voice while removing her panties and washing her vag in a stream. Meanwhile, town Marshall Henry Anderson and Deputy Jason hit the dirt looking for the missing girls after Kathy’s concerned father phones to report her disappearance. In other words, all the trashy scenes are now intercut with boring scenes of cops walking around reciting redundant dialogue. Look, their car! Look, their broken camera! Look, their dirty panties! There are also stock shots of a helicopter flying around that I assume is supposed to be more cops looking for the girls. Yep, these tootsies are that important after being gone for about 4 hours. Uh huh.

But the nightmare isn’t over just yet for Kathy and Nancy, as they end up stumbling upon even more deranged hippies. And here I thought hippies were all about peace and love, not rape and murder! Oh well… These other hippies (three guys, two girls and a toddler!) are involved in some kind of backwoods cult and are busy trying to bury a freshly-killed body when the girls arrive. Sensing trouble, cult leader Fritz (Ron Darby) threatens to bury the girls alive. They’re slapped around a little but instead the cult decide to let them off easy: “We shall now reduce you to sexual beasts!” Do you wanna know what happens to Nancy and Kathy next? Well then you’re shit out of luck because the film cuts away from them to a completely different and unrelated side story and it never returns to let us know what became of the girls! Boo! The new story involves a spaced out female heroin addict who is “kidnapped” by two old guys. Apparently they’ve lured her to their home in a plot to sell her to a Mexican whorehouse, but first they want to (surprise, surprise) rape her. After the “assault” (she seems to enjoy it), the cops from the first story show up and rescue her from being smuggled across the border in the trunk of a car.

Now it all makes sense! No, not this horrid excuse for a movie - The fact that the first portion of the film detailing Kathy and Nancy’s little adventure was never actually finished and the framing scenes of the cops looking around and the Mexi-whorehouse bit were all added later to turn what was once unfinished sleaze into feature length sleaze for the hippie rape fetishists in da house. Hmm, now that I think about it, this things seems a bit like LAST HOUSE ON THE LEFT, which was also released in 1972. The main difference is that Last House is actually disturbing and effective in spurts, while this one only registers as sleazy and laughable. With its horrible acting, extremely irritating soundtrack (the folk “song” looped over and over again during the rape made me want to die… ), its gratuitous full nudity during awkwardly choreographed rape scenes and the obviously (and horribly) improvised dialogue, this will definitely appeal to fans of dated trash and sleazy exploitations. Others don’t even bother with this one; the visual highlight is a rainbow striped VW bug, for Christ’s sake. As far as I know, it was released to tape only in pre-BBFC England around the beginning of the video boom era (well over 20 years ago) on the Inter-Ocean Video label. An alternate title may have been THE HITCH HIKER.
NO STARS!
Posted by The Bloody Pit of Horror at 5:40 PM