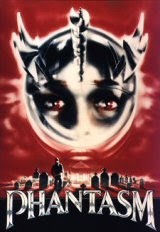 Directed by:
Don Coscarelli
When I watch a movie like this, I dread doing a review for it. Some of you will love it. Some of you will hate it. I loved parts of it, hated parts of it. Overall, it's basically just a barrage of horrific images and concepts, much of it creative and inventive, some of it not so much. One thing's for certain, director/writer/producer/ cinematographer/ editor Don Coscarelli dances to the beat of his own drummer and that's usually something to celebrate. Two brothers (Bill Thornbury and A. Michael Baldwin) and their bald uncle Reggie (Reggie Bannister) take on sinister graveyard dweller The Tall Man (played by the big, wonderfully menacing Angus Scrimm), killer mutant midgets and deadly flying silver spheres. It's all set around a graveyard and mortuary, where Scrimm for some reason is bringing the dead back to life and seems intent on causing as much trouble for the small town as humanly possible. Maybe I like to have character motivations hammered into my thick skull. Maybe I like to know what the bad guys plan to accomplish by slaughtering people. Maybe I'd like to know more about the past of the Tall Man. Maybe I'd like to know more about the parallel universe. None of these things are followed through with in a traditional sense (and the acting from most of the cast is pretty rough), but for the hallucinatory imagery, some well placed jolts and plenty of genuine surprises, this gets a mild recommendation despite the flaws. Just don't expect anything to make sense and be prepared to draw your own conclusions. A graveyard sex scene and some gore had to be cut for an R rating, but has since been restored for the DVD.

There are three sequels thus far, all starring Bannister and from Coscarelli; the slickly produced and bigger budgeted PHANTASM II (1988), which played theatrically, and the direct-to-video PHANTASM III: LORD OF THE DEAD (1994) and PHANTASM IV: OBLIVION (1998). None of those really did much explaining either. A fifth film has been in the works as far back as 2002, but nothing's in production as of this writing.
★★1/2
Posted by The Bloody Pit of Horror at 10:56 PM