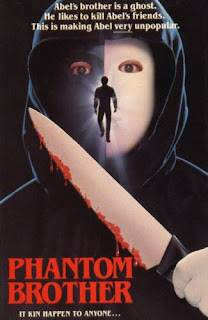 Directed by:
William Szarka
Two annoying long-haired teens who look like they belong on-stage with Warrant, and their two big-haired girlfriends (sporting stone washed jeans, no less!) are attacked when they travel to a "secluded" house out in the sticks. The place is home to a deranged, ghostly family (masked brother, giggling pale-faced Girl Scout sister and fat, twitching mother) that were killed in a car crash. A surviving human brother tends to the house, cleans up the bodies and blood and has an overacting, beer-guzzling, white trash adoptive family that want his inheritance to contend with. A movie crew shooting "Vampires on Valium on Valentine's Day" also become victims. There's some gore (electric saw, butcher knife...), a topless scene, lots of juvenile humor and voice-over narration in this silly, very dumb shot-on-video Betacam effort with slightly better lighting, music and sound than most similar efforts. It's a very rare tape and only worth searching for if you're an 80s horror completist. Someone who worked on the film claims the original script was basically scrapped and they just made everything up as they went along. I believe it.
Score: 2.5 out of 10
Posted by The Bloody Pit of Horror at 11:09 PM