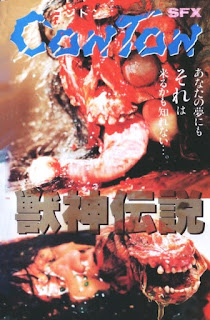 ... aka: 獣神伝説
... aka: 獣神伝説 - Conton
... aka: Beast God Legend
... aka: Con Ton
... aka: Conton - 獣神伝説 (ConTon - Beast God Legend)
Directed by:
Takuro Fukuda
Like many other "analog era" VHS horrors made in Japan in the 80s, this runs less than an hour (46 minutes) and seems made specifically to showcase gory special effects. Even the video box has "SFX" emblazonment on the cover right next to the title. College student Goh (Tasashi Kato) is having a hard time affording his tuition and is constantly harassed by yakuza-connected loan sharks from the Kanto Dragon Club that he borrowed money from after a minor car accident. Though he's already paid them, they're now claiming he owes 5.3. million yen in "interest." If things couldn't get any grimmer, he's haunted by recurring nightmares about monsters and mutants. The dreams are so bad they're keeping him from sleeping and are interfering in his life. He's stopped going to class and is only working a part time job as as gofer at Tokyo Film Studio, which isn't enough to pay his debt. His girlfriend Emi (Kyoko Katayama) is concerned for his future but, as she tries to help, he just keep pushing her away. Both of Goh's parents are dead so he can't get any help there. It all seems hopeless.
Goh has a succession of nightmare of monsters roaming some kind of leaky industrial plant. Others involve a snake-like monster popping out of a mouth in a sink full of green vomit and a zombie head hidden under a bucket on the floor that gets its face ripped off and then attacks him with tentacles that shoot out of its mouth. The yakuza (led by Kazuhisa Kawahara) are just as bad; constantly knocking on his door, standing outside his apartment and calling him. They even show up at his job to rough him up. After he manages to escape them, one of the prominent dream figures - a bulky axe-wielding demon warrior in a horned helmet - seems to materialize in real life and chases him around the studio. 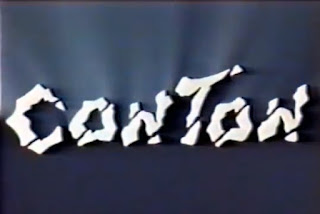 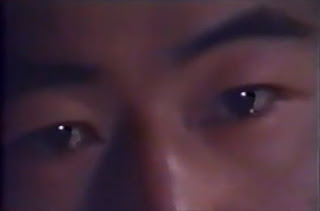 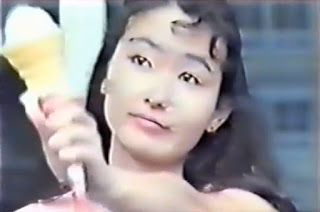 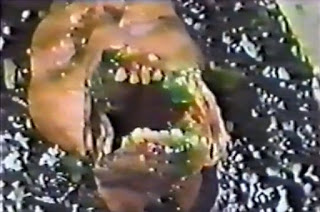 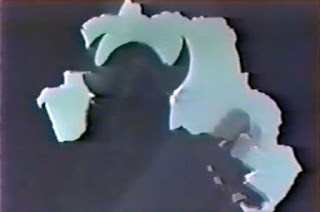 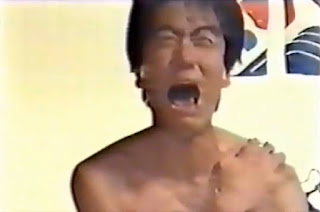 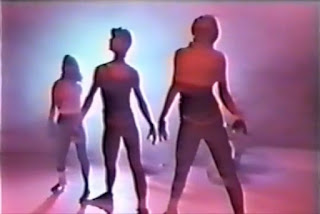 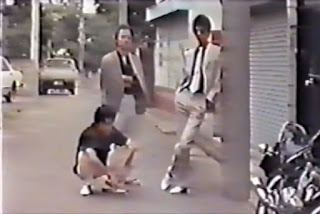 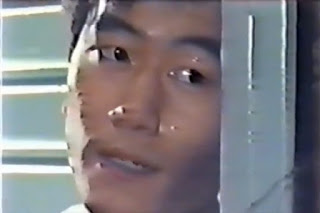 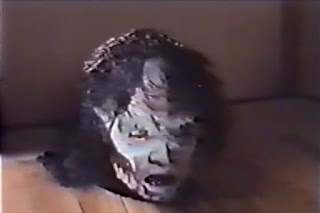 The yakuza confront Goh one more time at the film studio after hours. This time they pull a gun on him, have kidnapped Emi and are threatening to rape her if he doesn't pay up. The intensity is such that Goh does an American Werewolf in London-style transformation (even copying the exact fx, camera shots and editing) into a quilled monster that looks inspired by the radiation monster in Class of Nuke 'em High. It decapitates one of them and rips a face off as blood splatters on the screen. None of this really makes much sense and there's barely enough story to string together the amateurish - though fun - special effects scenes. Also featured are clips from some music video (complete with a choreographed dance), music stolen from PHENOMENA (1985), though slightly re-tooled here, and a surprisingly clever final shot. 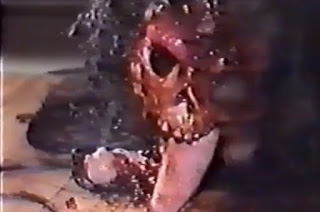 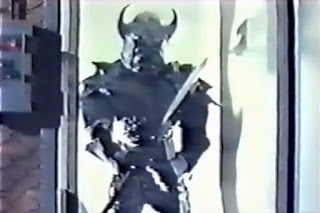 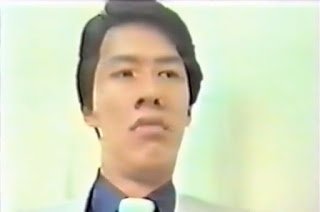 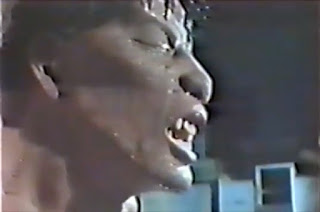 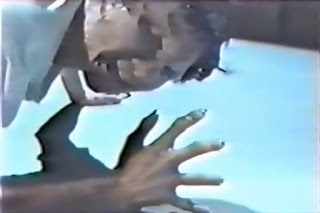 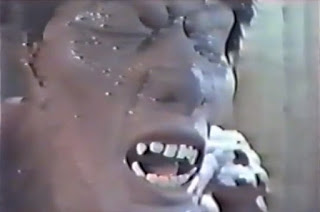 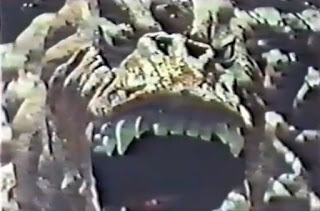 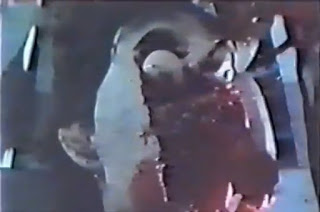 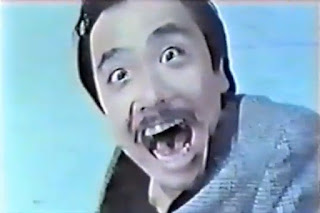 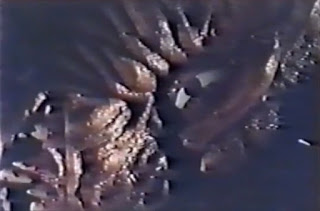 While this isn't the worst thing you'll ever see, it's easy to see why it's managed to slip into complete obscurity over the years. It's nowhere near as graphic, gory or exploitative as other films of this type and definitely doesn't have the notoriety factor of, say, the Guinea Pig films or some of the more revolting extreme underground tapes.
To date, this is the only directorial credit for Fukuda, who has mostly worked as a writer and is now best known for the Kamen Rider TV shows. The Japanese VHS release was on the label Zeus. A bootleg DVD-R is also available. None of these are in good condition. The one I watched looked terrible but that's currently the best that's available.
★★
Posted by The Bloody Pit of Horror at 1:58 PM

But they have a lot of gems,even some slashers

I've not watched many 80s Japanese horror films myself. Tetsuo is one in particular I really need to see. As of right now my favorites are Sweet Home, Mermaid in a Manhole, Evil Dead Trap and some of the ones from Hisayasu Satô but I've got a lot more to explore.

haven't seen that much either. really liked THE DISCARNATES (1988).

oh yeah... i couldn't place it at the time and it was driving me crazy.

May not have noticed it if I hadn't just recently watched Phenomena. They did tinker with it a little bit to try to cover it up but I recognized it right away.

I found Discarnates online with English subtitles and it's a decent print so I'll try to get to that in the next few weeks, granted work stays compliant. They've actually been giving me a few days off a week here recently. I think I'm going to use weekdays to try catch up on shorts since I usually have a few free hours in the evening. That'd be better than my terrible habit of half watching something, falling asleep and then never getting back to it! lol

spend 30+ minutes looking for something to watch, run out of time for it anyway . . .

Tulepsa - I've heard of the Virgin in a Box movies but not the other two you mentioned. They weren't even in my indexes here so I'll make sure to add them and keep an eye out. I couldn't find either on IMDb so they must be pretty rare!

spooky - Yeah I do that all the time. I have a zillion movies on DVD and on hard drives I've collected over the years and probably have watched 20 percent of them. And even having those I still end up browsing through Amazon, Hulu, Tubi, Youtube, etc. looking for stuff. Spending an hour "browsing" is probably hard wired in many of us from the video store days!