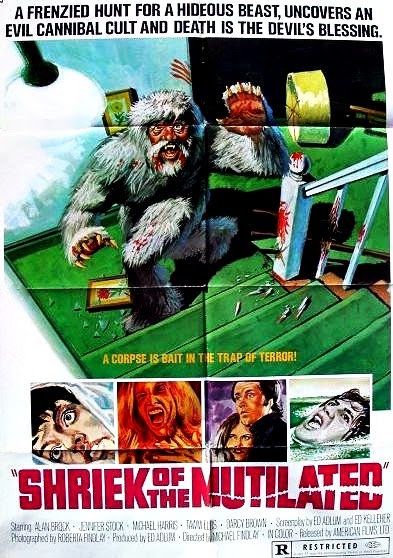 ... aka: Scream of the Snowbeast


Husband and wife sleaze-hounds Michael and Roberta Findlay did it all. They made trashy soft core obscurities, sex 'n' violence 'roughies', faux snuff films, hardcore porn (both straight and gay) and slasher movies, and here's their contribution to the 1970s Big Foot cycle. So forget all those wannabe horror films like Psycho and The Exorcist, this is truly the one! Four dull-as-dishwater college students (Michael Harris, Jennifer Stock, Darcy -nice glasses!- Brown and Jack Neubeck) are invited by a professor (Alan Brock) to go to a secluded island to investigate reports of a killer Yeti (or, Abominable Snowman). First they attend a happenin' 70s party complete with the catchy non-hit single 'Popcorn' by Hot Butter (which has unfortunately been removed from the Something Weird DVD version). A guy walking in (accidentally) bumps his head on a low-hanging ceiling light. Another professor tells the four students not to go (and explains why in an impossible-to-make-out solarized flashback), but his wife nags him and wants to leave, so when they get home he decides to get back at her by slitting her throat with an an electric carving knife!! He jumps into the bathtub fully clothed and cracks open a beer, when his barely-alive wife crawls into the room, throws in a toaster that isn't even plugged in and electrocutes him!


Meanwhile, the four students ignore the advice to stay home and go to the island, where they are promptly weirded-out by a seemingly mute Indian named Laughing Crow and are stalked, attacked and killed off by an awful white creature that looks more an upright version of The Shaggy Dog than a monster. You can hear its pulsating heart-beat from miles away (!) and its face is blurred out so you can never get a good look. When you finally do get a decent look near the end of the film (see video), it's one of those classic "I can't believe they actually tried to pass that off as a monster" moments. But wait! There's more! The monster is actually (gulp!) a guy dressed up, and the island is home to a flesh-hungry cannibal clan who want the students as their main course. Full of hilariously awful acting, chainsaw-style editing and ridiculous dialogue, this is a laugh riot that deserves a larger cult following than it currently has. More people should see it.

Several of the cast members were also in Invasion of the Blood Farmers (1972); which was edited by Mike and shot by Roberta. On the original I.F.S. video box, there are loads of errors on the write-up on the back, including calling the Indian is named 'Laughing Cow' (ha!) It also has what appears to be a mock Oscar statue on the bottom left corner, which just makes the whole experience that much funnier.

I enjoyed this movie as I agree with your sbig rating. This movie reminded me of Night of the Demon (which is another sbig movie). If you haven't watched Night of the demon already, you should. It is hilarious!

I have not seen Night of the Demon yet but I'll definitely get around to it! I've had that one recommended to me a few times now.