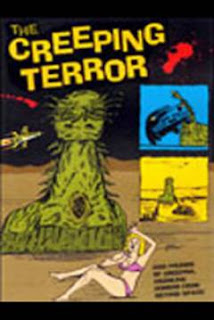 ...aka: Crawling Monster, The

Directed by:
A.J. (Arthur) Nelson
Ed Wood move over. In fact, stand up, walk out of the building, hop on a plane and leave the country. This has to be the worst horror film ever made! So if you get a chance, make sure to watch it! Filmed in and around Lake Tahoe on a budget that might be able to fill up your gas tank comes the tale of a giant alien monster that eats humans. The sloth-paced creature looks like a mound of shag carpet and at any given time you can see the feet of the actors playing it underneath the costume! Victims (including drive-in theatre patrons and teeny boppers at a rockin' party) get to scream and struggle while obviously pushing themselves into the big hole that's supposed to be its mouth. Part of the soundtrack was "lost," so instead of the missing dialogue, narration is employed to try to make sense of it all. One of the stars is William Thourlby, the original "Marlboro Man" model in print ads, who also appeared in CASTLE OF EVIL (1966). The film is also available with commentary from the MST3K folks (but doesn't really require it). By the way, the director produced, edited and stars in the film; using the names "Art J. Nelson, Jr.," "Arthur Ross" and "Vic Savage." Actually, his whole stint as a filmmaker is shrouded in mystery (see below)...

There have been some interesting claims made recently about Mr. Nelson and his wife (leading lady Shannon O'Neil). Some people claim both were con artists who basically fleeced dozens of people out of their hard-earned money. The same claims state that "Art J. Nelson" is a fake name the director used so he pass himself off as Argyle Nelson (aka Art J. Nelson), a prolific editor, assistant director and production supervisor. The fake Nelson then used the guise of experienced filmmaker to get people to "invest" their money in this project. Thus a cheap, inept film was made, people never got their money back and both the fake Nelson and Mrs. O'Neil fled town with the leftover money. Don't know for sure the validity of these claims, but I've read them several different places. Anyway...
NO STARS!
Posted by The Bloody Pit of Horror at 4:14 AM