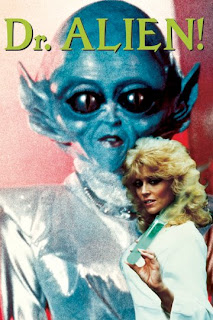 ...aka: I Was a Teenage Sex Maniac
...aka: I Was a Teenage Sex Mutant
Directed by:
David DeCoteau
T&A heavy teen sex comedies were extremely popular during the 80s. I guess we have the PORKY'S series to thank for that. There were also a large number of films made during this time about high school aged boys having their sexual awakening at the hands of older and more experienced female seductresses. I guess that's the price we had to pay for PRIVATE LESSONS becoming a surprise hit. Toward the middle of the decade, Stuart Gordon's H.P. Lovecraft films, horror strongly based in science (and science fiction), were also wildly popular. I can just imagine the genesis for this little B-movie epic happening right now. Billy Jacoby (real name: Billy Jayne) stars as Wesley Littejohn, a geeky, unpopular, conservatively dressed college freshman who still lives at home with his parents (Arlene Golonka and Jim Hackett) and bratty kid brother (real-life brother Bobby Jacoby). Wes is frequently bullied and as a result is having a difficult time finding the platform to exert his masculinity and impress the snobby campus cuties. A blue, huge-eyed, big-headed alien disguises itself as a sexy science professor named Ms. Xenobia (Judy Landers) and starts using Wesley in her experiments; transforming him from a geek into a dreamboat (basically all he does is take off his glasses and joins a rock band). A snake-like pineal gland pops out of his fore head (just like in FROM BEYOND) and before he knows it women are suddenly ripping their clothes off at the mere sight of him. So where does this leave the sweet, squeaky-voiced girl (Olivia Barash) who liked Wesley the way he was before?
.
If DR. ALIEN is remembered for anything it'll be for the record number of exploitation movie actresses dropping by for cameos. Porn queen Ginger Lynn Allen (who'd just retired from the adult film business to try to make it as a 'serious" actress"), well-known Scream Queen Linnea Quigley and the lesser-known Laura Albert (who is primarily a stuntwoman but also put in her fair share of late 80s/early 90s cheese movie appearances) are members of a female rock band called "The Tangpoons." They show up to dance topless in one of Wesley's dreams and also perform a song at a club at the finale. When Wesley stumbles into a locker room, he's literally mobbed by an army of female fitness fanatics led by veteran sexpot Edy Williams. Also showing up in this scene are Michelle Bauer (another major Scream Queen during this time) and Karen Russell. Elizabeth Kaitan is the only one to keep her clothes on, appearing briefly as a waitress. In addition to them, Raymond O'Connor mugs his way through his role as the alien's assistant, Troy Donahue plays the biology teacher Ms. Xenobia replaces and Stuart Fratkin plays Wesley's equally unpopular best friend.
.
Jacoby lipsynching to "Killer Machine" by The Sex Mutants.
.
Silly as this all is, it's definitely one of DeCoteau's better films. There are some laughs, Jacoby is an appealing lead, the cameos are fun, the music is good, the alien design is hilarious and it's all fast-paced, performed with enthusiasm and gaudily colorful. In other words, a fine B film that doesn't pretend to be more than it is.
★★1/2
Posted by The Bloody Pit of Horror at 3:10 AM