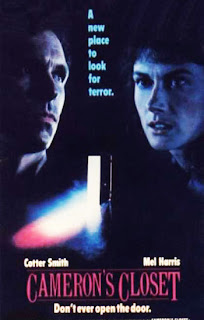 Directed by:
Armand Mastroianni
Obsessed scientist Tab Hunter puts his young son (Scott Curtis) through psychological hell trying to prove his belief in ESP abilities. After pops is decapitated, the son goes back to live with his mother (Mel Harris) and his fears manifest themselves as a pretty cheesy looking monster (designed by Carlo Rambaldi) that hides in his closet. Written by Gary Brandner, the author of THE HOWLING, and directed by the cousin of actor Marcello.
Score: 3 out of 10
Posted by The Bloody Pit of Horror at 9:13 PM

unimaginatively staged and adapted from brandner's own book (which i haven't read yet); mostly TVM-level stuff.