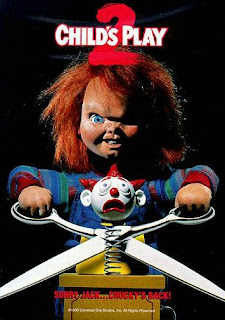 Directed by:
John Lafia
You can't keep a Good Guy down, especially when he's still raking in the dough, so Chucky's back and he's still after the same poor kid from the first film. With his mom a little too traumatized by the events of the original, young Andy (Alex Vincent) has been forced to move in with well-meaning foster parents (played by Gerrit Graham and Jenny Agutter). Also living in the same home is a troublemaking, chain-smoking teen played by Christine Elise, who was then known for playing Brandon's girlfriend on the awful Beverly Hills 90210. As expected, Chucky (voiced by Brad Dourif) runs around commiting more gory murders while throwing out the occasional Freddy-esque wisecrack. He hops on a the back of the schoolbus and follows Andy to school, stabs his bitchy teacher (Beth Grant) with an air pump and then beats her to death with a yard stick. Other characters are killed by sewing and xerox machines, and someone breaks their neck after being tripped down the stairs. As expected, poor Andy is blamed for the killings and no one believes him about Chucky. Kevin Yagher's doll effects are excellent throughout. The ending (clearly the best part of the entire film) takes place inside a doll factory mass-producing the Chucky dolls and has a memorable murder via conveyer belt and plastic doll eyes.
.
Director Lafia (who had co-written the original film) does what he can and tries to spice things up with interesting camera angles/placements and even throws in some nice visual flourishes here and there. Yet while Part 2 is certainly adequate, it's little more than a less-effective retread of the first with more comedy added. The cast includes Grace Zabriskie as a social worker, Peter Haskell (who'd play a different role in CHILD'S PLAY 3) and Matt Roe (who appeared in another killer doll movie - PUPPET MASTER - a year earlier) as a policeman.
Score: 5 out of 10
Posted by The Bloody Pit of Horror at 11:57 PM