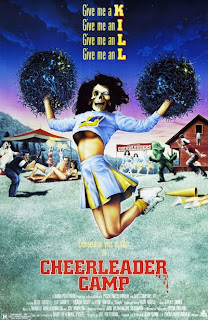 ...aka: Bloody Pom Poms
...aka: Bloody Scream
Directed by:
John Quinn
Betsy Russell is a cheerleader on medication for mental problems who has recurring nightmares ("Daddy! I need love!”). When she and her seven member cheerleading squad travel to a secluded camp for a competition (surprise!) someone starts to kill everyone off. A bimbo blonde cheerleader (her topless scene is repeated no less than three times) turns up dead with slit wrists and the camp owner (Vickie Benson) hides the body in the freezer so she won't have to close the camp down! Playboy Playmate Teri Weigel (doing hardcore porn these days) sunbathes topless, then has hedge clippers rammed through her head. Fellow Playmate Rebecca Ferratti (with really high hair) is mowed over by a van and a guy is disemboweled with an axe to the stomach. Stupid as this is, there's plenty of T&A and blood. I'll give it that much. George "Buck" Flower is funny as a voyeur groundskeeper who gets shot, former teen heartthrob and singer Leif Garrett is Betsy's jealous boyfriend, Lucinda Dickey (from the BREAKIN' films and the underrated NINJA III: THE DOMINATION) is the team mascot, and Travis McKenna is a fat, comic relief male cheerleader whose ass gets stuck in a van window when he tries to moon somebody. The film (overall sort of a combination of FRIDAY THE 13TH campground gore and PORKY'S 80s-style low-brow humor) received a DVD release in 2004, including a commentary track from the director and producer/co-star Jeff Prettyman. It had previously been released as BLOODY POM-POMS.
.
A little clarity involving the supposed 'sequel' (which was listed both in John Stanley's Creature Features book and on the Internet Movie Database)... Apparently, Mrs. Russell starred in a somewhat similar slasher film about sorority girls spending Spring Break in the sticks and being hunted down by a mutant cave dweller, which somewhere along the way was promoted as a Cheerleader Camp sequel (although it doesn't have anything to do with cheerleaders). The film (shot in 1990) was barely released on video under the title THE MILLENNIUM COUNTDOWN and then was finally mass distributed on DVD through Retromedia under its original title CAMP FEAR.
Score: 3.5 out of 10
Posted by The Bloody Pit of Horror at 7:04 PM