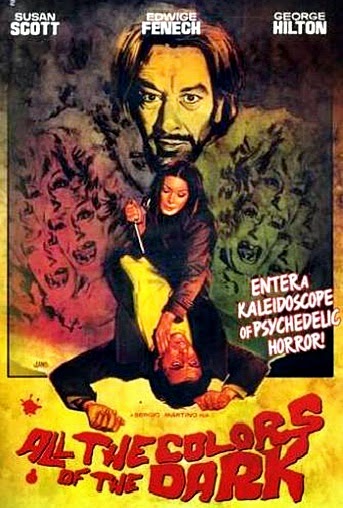 
Opening with a knockout dream sequence (featuring a blue-eyed killer stabbing to death a grotesque old lady with rotten teeth, a pregnant woman on a doctor's table and a nude woman on a bed), this giallo seems to be taking a unusual path by twisting around the conventions set down by the genre. It actually works pretty well even though there's about one too many convoluted plot elements squeezed in at the very end. Edwige Fenech (previously seen in Martino's THE STRANGE VICE OF MRS. WARDH) fits comfortably in her usual mentally-screwed-up-beautiful-lady-in-distress spot as Jane Harrison, a nightmare-plagued young women living in London whose mother was murdered when she was a child. Her live-in fiancé Richard (George Hilton) seem kind, patient and understanding, but he's also away most of the time at work. Jane's sister Barbara ("Susan Scott"/Nieves Navarro) also appears to be sympathetic and protective of her sister and takes her to see a psychiatrist (George Rigaud) who attempts to unlock the secrets of her past. After her session, Jane is pursued in a subway by the same sinister man from her dreams with the cracked blue eyes (a wonderfully creepy Ivan Rassimov in some interesting contacts). He follows her home and starts keeping watch outside of her apartment house. Jane is befriended by a new tenant named Mary (Marina Malfatti), who claims she has the answer to all of Jane's problems and then things start to get even weirder.

So before long, Jane finds herself up to her neck in a black magic cult working out of a secluded castle and headed by a guy (Julián Ugarte) who wears Freddy-like claws on his hands. During her initiation, they make her drink fresh dog's blood and pass her around during a sex orgy, where she's fondled by zombie-like pasty-faced cult members. After she's pursued by the killer once again and apparently unperturbed by her first traumatic encounter with the Satanists, Jane becomes desperate enough to return to the cult, where they convince her she'll be "free" from the killer if she does just as they say. The cult leader has sex with her again and give her a knife. Mary kills herself by falling over on it and then Jane is informed she's obligated to take her place. And guess who else is involved in the Satanic sect? Why the mysterious blue-eyed killer, of course! When Jane tries to escape them, he sends Doberman's after her to chew up her arms and then chloroforms her. She wakes up back in her apartment. Are these events actually taking place or are they simply delusions in her pretty little disturbed head? After a rapid-fire succession of murders, plot twists and maybe even a prophetic dream insert, a police inspector finally reveals our answer.
.
I did have some quibbles with parts of the script, but technically speaking, this movie is quite good. Martino's direction is smoother, more stylish and much more assured than what I'm accustomed to seeing from him. Miguel Fernández Mila and Giancarlo Ferrando's vivid, surreal and sometimes psychedelic cinematography and Bruno Nicolai's score are both superb and add immensely to this film. And while there's the requisite amount of Fenech flesh on display and some blood, the film is more concerned with style and story than it is providing cheap thrills. All around, the cast (which also includes "Alan Collins"/Luciano Pigozzi, Dominique Boschero and Tom Felleghy) is very good.

Tutti i colori del buio originally made it to U.S. theaters in 1975 under the title They're Coming to Get You. It was then released to VHS several times as either Day of the Maniac or Demons of the Dead. The Shriek Show DVD contains a lot of goodies, like separate interviews with the director (who claims ROSEMARY'S BABY was a chief influence) and star George Hilton, a photo gallery, alternate US title sequence, the original Italian trailer and radio spots, plus four other unrelated trailers.