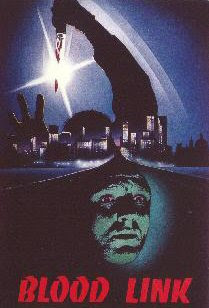 
Here's a pretty decent horror-thriller (an Italian/ U.S./ West German co-production); some even include this title on their list of gialli. Dr. Craig Mannings (Michael Moriarty) suffers from disturbing, blurry visions of killing women he's never met before. His psycho, impotent identical twin brother Keith (also played by Moriarty), believed to have been killed in a fire many years back, is actually responsible. The two were Siamese twins at one point, were separated and now share a "bond," seeing everything through each other’s eyes. Moriarty is excellent in this dual role. When Craig travels to Germany (home of his brother) the understandably confused local cops pin the murder rap on him. There are some plot holes here, but this movie deserves better treatment (and distribution) that what it's had. It's interesting throughout, well photographed, has a fun (but small) role for Cameron Mitchell (as Bud Waldo, an aging boxer/victim), is full of female nudity (including Ohio-born 1973 Playboy Playmate Martha Smith) and has an Ennio Morricone score. Penelope Milford (not long after her Oscar nomination for COMING HOME and playing the good doctor's girlfriend) and Sarah Langenfeld (Mitchell's daughter) co-star, and Geraldine Fitzgerald and Virginia McKenna both have small roles.
.
There's no DVD release for this one yet and the Embassy video release (which came out in 1985) is long out-of-print.