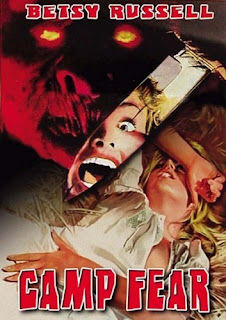 ...aka: Millennium Countdown, The


Directed by:
Thomas A. Keith


Regardless of the outcome, it was interesting to finally see this one. For a long time it was listed in reference books and on online sites as the long-lost sequel to the popular slasher flick CHEERLEADER CAMP (1987). In actuality, however, the two films are entirely separate entities and have nothing in common aside from shared cast members Betsy Russell and George "Buck" Flower. In fact, ten years before the DVD even came out, this was already released on VHS by a company called Paramax, who must have only issued a hundred or so copies because this faded into complete obscurity about five minutes after it was released. Things start out on the right note at a sorority house with several minutes of gratuitous T&A; with the always-amusing Michelle Bauer and ill-fated porno queen Savannah (Shannon Wilsey) taking turns with the shower, women walking around in lingerie and several other anonymous ladies flashing their silicone-enhanced cans for the camera. I hope you enjoyed that because, strangely, there will be no more nudity at any other point in this film. A few of the other (clothed) sorority sisters talk to Bauer for a minute or two before heading out the door. Before doing so they make passing remarks about how they'll be spending their Spring Break camping out in the woods with a professor. Why? I actually can't remember, but I doubt it's important. The important thing is that they're not bringing Michelle along on their trip. Boo! Strike 1.
.
The ladies attend an archeology class (where Juliette Cummins make an uncredited appearance jamming to her walkman) and then decide to spend the night at a dance club where Wendy (Erika Nann), clad in a lycra cow print ensemble, treats us to a hysterically funny song-and-dance routine. OK, the song is absolutely horrible, but the dancing is pretty funny. The next day the group is organized and ready to go, with Professor Mark Hamilton (Vincent Van Patten, who was married to Russell at the time) at the reigns and students Jamie (Russell), Wendy, Tiffany (Peggy Sands aka Playboy Playmate Peggy McIntaggart) and Melissa (Mindy Myer) ready to learn all about ancient Indian relics and such. Before they can even pitch their tents, they run into a drunken vagrant (Flower) and are harassed by some obnoxious bikers at a general store. Fair enough. The film's just throwing in a bunch of needless characters we'll see getting slaughtered later on, right? Wrong. Unfortunately this movie seems to forget all about satiating the target audience's thirst for blood. Strike 2.
.
The girls eventually make it to their destination only to encounter myriad horrors in the form of a scaly lake monster (which is only in one scene and then never mentioned again!) and a giant cave-dwelling druid (played by 7-foot tall former professional basketball player "Tiny Ron"/Ron Taylor). The girls are abducted one at a time, dressed in animals rags and then chained up in the cave. The druid wants to sacrifice them. It has something to do with the millennium or the moon or Stonehenge-like rock formations. The bikers show up again to needlessly complicate matters, as does a wise Indian (Jim Elk). What should be a simple backwoods exploitation excursion with gore and nudity soon turns into an irritating episode of Scooby Doo with a dozen people basically running back and forth in the woods. Not nearly enough of them die. Most importantly, not nearly enough of them die in an extremely gory way. Strike 3. You're out!
.
IMDb says this is from 1991, the production date at the end of the credits says 1994 and several reference books I have list this with a 1990 copyright, so I decided to include it on here for the sake of completion. If I had to venture a guess, I'd say this was made in 1990 and first released in 1994. The cast includes David Homb (SHOCK 'EM DEAD), Nels Van Patten (Vincent's brother), Suzanne Ager (EVIL TOONS) and Dori Courtney (SORORITY BABES AND THE CREATURE FROM HELL).