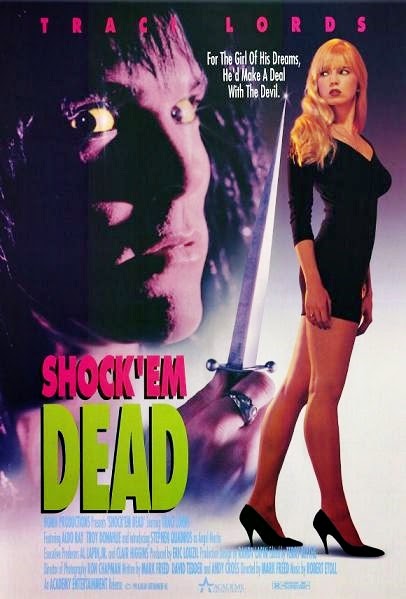 
A lot of things about this video are painfully cheesy, but that's exactly what makes it one of the most entertaining entries in the super-tacky head-bangin' horror sub-genre that rocked the 80s and early 90s! Nerdy and obnoxious aspiring rock guitarist Martin (Stephen Quadros) is humiliated by an up-and-coming L.A. rock band during an audition, gets evicted from his trailer and loses his job at a pizza parlor run by Aldo Ray (in his final role). Thankfully. there’s this local voodoo priestess (played by Tyger Sodipe; a Jamaican actress who is offbeat to put it mildly!) who frequently shuffles up and down the street in full garb and white-face (!) to offer him a chance at fame, fortune and a virtual harem of big-haired babes if he’s willing to sign over his soul to Satan. Martin agrees and after a ridiculous dream sequence features a demonic guitarist with a double guitar, entranced groupies and a demon rising from a casket, awakens in a new house with teased hair, a closet full of leather duds, three busty live-in groupies, supernatural powers and a promising career in a hot new band with hit songs like “Virgin Girl” and “I’m in Love With a Slut.” Unfortunately, he also discovers he must kill people and suck out their souls to maintain his lifestyle. Traci Lords isn't give much exciting to do as the band manager (and despite the suggestive box, she keeps her clothes on at all times), Troy Donahue shows up briefly as a record exec for “Casualty Records,” Karen Russell is a one of demon groupies and former pro wrestler Big John Studd is a cop.

This relic of another era is extremely entertaining, frequently hilarious and has a few interesting ideas to go along with loads of lame music (including what must be the worst version of 'Purple Haze' ever recorded), cheesy effects work and throwaway topless scenes. Great for what it is.