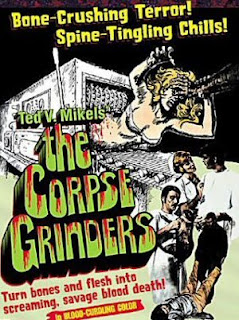 ...aka: Flesh Grinders, The

Directed by:
Ted V. Mikels
A favorite amongst fans of bad movies, this nutty mess is fairly entertaining and a lot funnier than just about any intentional comedy being produced today. The setting is a cat food company and the budget was around 47,000 dollars, so prepare yourself for a laugh-fest of huge proportions. Sean David Kenney (CYCLE PSYCHO) is our hero, Dr. Howard Glass, who teams up with a blonde nurse (Monika Kelly) to find out why plain old domestic SoCal cats are attacking, killing and eating their owners. Well, duh! It's because the Lotus Cat Food Company (headed by non-actor Sanford Mitchell and J. Byron Foster) is using human flesh in the product! Two psychotic gravediggers (a corrupt cemetery caretaker and a British woman obsessed with dolls) are on the payroll to supply corpses (they charge 20 cents a pound but want more), which are pushed through a grinding machine. The "machine" is obviously a painted cardboard box with a few plastic knobs glued on. Living people (including a girl in a bikini) are also pushed through and hamburger meat is pushed out the other end and collected in a bucket. The meat is then canned and sold, turning America's cute kitties turn into blood-hungry beasties. By the way, the attack scenes are hilarious! The sets (especially that two-room cat food manufacturing factory), acting, production values and dialogue (in part thanks to a script co-written by Arch Hall, Sr. of EEGAH! fame) are wonderfully awful. The cast includes Ray Dannis (who played the title role in THE UNDERTAKER AND HIS PALS; which often played on double bills with Corpse), ex-prize fighter Vincent Barbi and Chicago area playwright Ann Noble.

In person, director Mikels is so charming and so proud of his grade-Z masterpieces (see also THE ASTRO ZOMBIES and BLOOD ORGY OF THE SHE-DEVILS), that it's hard not to at least appreciate his enthusiasm and tenacity. Nearly 20 years later he even directed a sequel to this featuring Liz (DESPERATE LIVING) Renay and Dolores (GLEN OR GLENDA) Fuller that I must see! Ted is still directing to this day and just recently completed his 20th feature - DEMON HAUNT (2008) - and is currently working on a second Astro Zombies sequel... in 3-D!
Score: 2 out of 10
Posted by The Bloody Pit of Horror at 5:43 PM