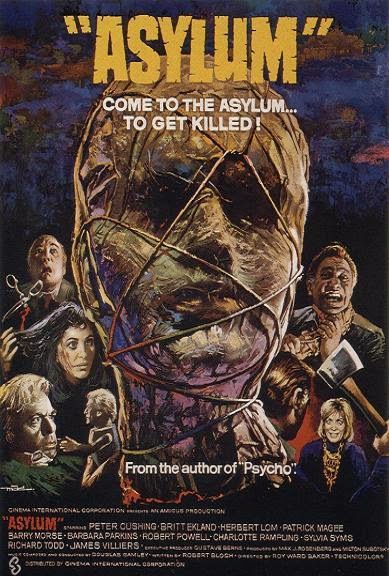 
The fourth of eight horror omnibus' from Amicus, and an above average one which benefits primarily from an excellent cast. The inmates of an insane asylum tell a visiting young psychiatrist (Robert Powell) three tales of horrifying madness and revenge, most of which deal with the supernatural. It's his job to then decide which of the inmates is actually a former doctor who has gone off the deep end to impress potential employer Dr. Rutherford (Patrick Magee). The first story - "Frozen Fear" concerns a man (Richard Todd) and his mistress (Barbara Parkins) who off his wife (Sylvia Syms), chop of the body and put the severed (but wrapped up) limbs in a freezer. Incredibly, the parts return to life to exact revenge. A severed head rolling around and breathing through the wrapping are creepy, memorable images. It's like the disembodied hand segment in Amicus' first anthology DR. TERROR'S HOUSE OF HORRORS (1965), only amplified. The second story - "The Weird Tailor" finds financially strapped tailor Barry Morse assigned to construct a glowing suit made out of special fabric by elderly customer Peter Cushing, who is grief stricken over the recent death of his son. You can see just where this one's going, but excellent performances from the two lead actors make it worthwhile. Next up is "Lucy Comes to Stay;" which involves mentally unstable Barbara (Charlotte Rampling), who has just been released from an asylum, supposedly cursed of her schizophrenia. Her sneaky blonde "friend" (Britt Ekland), who was responsible for her getting put away to begin with, shows up and leads her back down a path or mayhem and murder.

The stories (all written by Robert Bloch) are fairly predictable but entertaining nonetheless and everything is neatly linked together by the framing segments, which themselves turn into a fourth story (titled "Mannikins of Horror") that features Herbert Lom as a doll maker dabbling in voodoo and soul transference. The cast includes James Villiers, Megs Jenkins (The Innocents) and Geoffrey Bayldon. House of Crazies is an alternate version to avoid with a running time of 86 minutes (6 minutes missing).