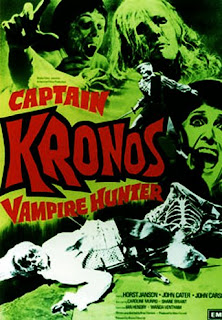 I have yet to venture all the way through the Hammer Studios horror film catalogue (I'm actually not even close!), but this exciting, humorous, unique and very entertaining spin of traditional vampire lore one is easily one of the best I've seen from them. With their Dracula series on its last legs and Cushing and Lee gravitating toward other projects, Hammer wanted to ignite a brand new series of vampire films and placed their bets on Kronos to be the film that would shepherd in a bankable new series of films. Unfortunately, they waited two whole years to actually release it (finished in 1972; not released until 1974) and in the meantime THE EXORCIST swept in and completely changed the face of the genre. KRONOS was also poorly distributed on a double-bill with FRANKENSTEIN AND THE MONSTER FROM HELL, one of Hammer's lesser films in that series. As a result of all these factors, it was a theatrical flop and is regarded as one of the films that caused Hammer to go under. Oh well. There's no accounting for taste, right?
German actor Horst Janson plays the title role; a suave, atypical, swashbuckling spin on Van Helsing who smokes dope, meditates and doesn't hide his love for the ladies. Imagine any number of Western movie characters played by Eastwood, mix in a dash of the debonair (think James Bond) and a lighthearted touch of Errol Flynn, and put this guy in a 19th Century period setting and you've pretty much got Kronos. Thanks to the activities of an aristocratic vampire family who are turning beautiful young ladies into wrinkled shadows of their former selves, Kronos teams up with a hunchback scholar Hieronymous Grost (wonderful John Cater), a sexy gypsy named Carla (Caroline Munro) and his old pal from his army days, Dr. Marcus (John Carson) to thwart this menace creating a wave of panic across the countryside.
CKVH benefits (at least in my opinion) from eschewing traditional vampire mythology in favor of original ideas. The vampires here aren't after blood. They're after the essence of eternal youth to retain their vitality and beauty. Here, a vampire's pass causes flowers to wilt and changes to occur to buried frogs. Sunlight also has no effect on them as they're free to go where they want, when they want. Another nice change from the typically set-bound period vampire film (which seem to spend more time in dark, musty old castles and dungeons than anywhere else) is that much of the film takes place outdoors during the day. Wonderful use is made of the British countryside and of various scenic locales. Those, as well as some striking visual and artistic set-ups, are brought to life through Ian Wilson's imaginative cinematography. Laurie Johnson contributed an appropriately rousing score.
Sadly, this was the first (and so far only) time Brian Clemens (who also scripted and co-produced the film) stepped behind the camera to direct. Best known for his work on the TV show The Avengers, Clemens proves here to have both a nice eye for visual detail and a way of bringing out the more endearing qualities of his lead actors. He's also created a film with an unusually broad audience appeal that most people will likely enjoy. Also in the cast are Shane Briant and Lois Dane as the spoiled elitist vampire children of a withered matriarch (Wanda Ventham) and Ian Hendry in a scene-stealing cameo appearance as a tavern lech.
★★★
Posted by The Bloody Pit of Horror at 10:32 PM