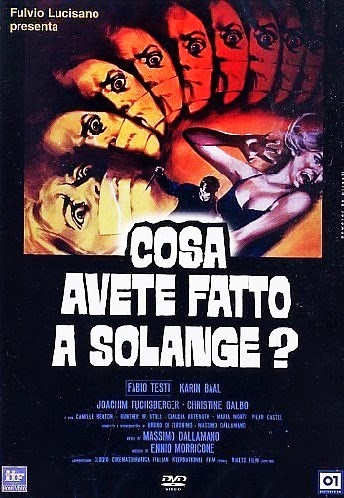 ...aka: School That Couldn't Scream, The


This interesting, but often snail-paced, giallo (with very little actual on-screen violence) "boasts" a rather grisly killing technique - Young female victims are stripped naked and then stabbed in the crotch. Teen students at a London Catholic girls academy are falling prey to this sex killer, who has all the trappings of your usual genre assailant; he/she dons black leather gloves, drives around in a black car and dresses in black (a priest's outfit to be precise). The list of suspects is about a mile long as we're introduced to a slew of seedy characters, starting with handsome school professor Enrico "Henry" Rossini (Fabio Testi), who seems to be a man-whore taking advantage of his position to sleep with his pupils. He's carrying on a secret affair with beautiful student Elizabeth Seccles (Cristina Galbó, from LET SLEEPING CORPSES LIE), the niece of a colonel, and while the two are out on a rendezvous, she sees brief glimpses of the first murder. Fearing the affair will mean his termination at the school and exposure to his icy blonde wife Herta (Karin Baal), also a teacher, he suggests the two keep quiet for awhile and in the meantime rents a love nest where the two can secretly carry on the affair.

Pretty much the entire school staff are set up as possible suspects as we're introduced to shady types like stern school Headmaster Leach (Rainer Penkert), Professor Bascombe (Günther Stoll), paranoid voyeuristic pervert Mr. Newton (Antonio Casale), who who uses a peephole to spy on the girls in the shower room, school math/science professor and priest Father Webber (Marco Mariani) and others. Camille Keaton, seven years before finding her greatest fame as a vengeful rape victim in the notorious I Spit on Your Grave (1978), makes an effective eleventh hour appearance as Solange, a mentally ill girl who holds the key to the crimes. And the schoolgirls themselves are holding some secrets of their own, involving sneaking off to the local college, sex parties and abortion. A lot of time is spent on the investigation as Inspector Barth of Scotland Yard (played by Joachim Fuchsberger, who starred in dozens of German krimi films) interviews suspects and tries to piece together the investigation.

Based on the Edgar Wallace novel The Clue of the New Pin (which wasn't credited in the Italian language print), this West German/Italian co-production is a bit too plot-heavy and extremely talky, but there are also some rewards for more patient viewers. For starters, the story itself has enough twists and turns to maintain a certain degree of interest and will keep you guessing (though I'm still left guessing about a certain drowning murder that does not fit the modus operandi of the sex killer, but one of the other characters and is left unexplained). The acting isn't bad and the English dub is above average. Also, the Ennio Morricone score is typically excellent and the cinematography by Aristede Massaccesi (i.e. Joe D'Amato), while flat at times, has some surprisingly inspired moments (shots through branches as a boat floats down the Thames river; orange-tinted flashbacks; a hectic POV as the killer rushed down a long flight of stairs...) All in all, it's above average from what I've seen of the giallo genre.

The Shriek Show DVD is a good-looking print of the film, but judging by the trailer, at least two of the scenes have been trimmed here. It's also pretty dry when it comes to special features, with just scene access and a few trailers.