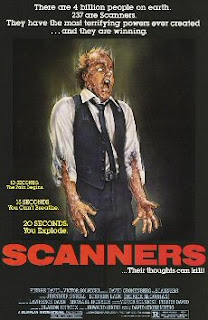 ...aka: Telekinesis
...aka: Telepathy 2000
Directed by:
David Cronenberg
Cronenberg welcomed the 80s with his most polished and approachable film yet. Filmed primarily in the winter of 1979, this film was the director's largest budgeted movie up until that time and also made more at the box office than any of his previous films (it made more than quadrupel its budget in the U.S. alone). It's an intricate, interesting and entertaining movie (with some uneven passages here and there) involving a group of powerful telepaths (scanners) who have the ability to read minds and, when times call for it, make veins swell and heads explode. Vagrant scanner Cameron Vale (Stephen Lack) is kidnapped, then employed by Consec, a government organization who have developed a drug to control telepathic tendencies, to take out power-hungry scanner renegade Darryl Revok (Michael Ironside), who in turn is in the middle of a bloody war with a more peaceful commune of telepaths, led by Kim Obrist (Jennifer O’Neill). Dick Smith’s super-bloody special effects (limited to one exploding head, some bulging veins and a gory finale) gave this film a reputation as a gorefest, but there’s much more on Cronenberg’s mind that shock tactics; the misuse of power and the indirect (and often incidental) linking between big business, the state, science and terrorist activity are at the forefront of this film. Lack's weak and very bland performance hurts the film somewhat, and O'Neill's character seems underdeveloped, but there's nice work from the always-great Ironside (appropriately over-the-top here), as well as Patrick McGoohan as a kind scientist who takes Cameron under his wing. There's also a typically frantic cameo for Cronenberg regular Robert A. Silverman. Lawrence Dane (RITUALS) and Lee Broker (THE PYX) co-star.
.
Supposedly inspired by a chapter in William S. Burroughs' 1959 novel Naked Lunch dealing with an underground organization of powerful telepaths called "Senders." Cronenberg would go on to adapt Burroughs' book himself in 1991. Followed by (so far) four sequels, made for the direct-to-video market; SCANNERS II: THE NEW ORDER (1991), SCANNERS III: THE TAKEOVER (1992), SCANNER COP (1993) and SCANNERS: THE SHOWDOWN (1994).
★★★
Posted by The Bloody Pit of Horror at 7:29 PM