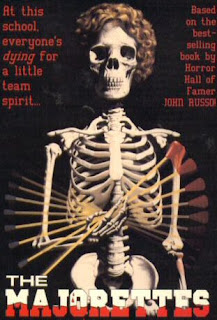 
NIGHT OF THE LIVING DEAD alumni made this one. Director/editor S. William Hinzman had played the original graveyard zombie that attacks Barbra and Johnny in NIGHT. Producer/co-star John A. Russo acted in and co-wrote the NOTLD script. Russell Streiner, who played Johnny in NOTLD, has a small role as a Baptist preacher. These three combine forces for a low-budget slasher flick that starts out horribly but "improves" a bit as it goes along. The plot about a hooded killer in camouflage stalking and killing high school majorettes is coupled with amusing supporting characters such as a greedy German live-in nurse, her voyeur janitor son, a cult of Satanist leather-clad bikers, a corrupt cop, a knocked-up teenage jezebel and more. The plot twists become more ridiculous (and entertaining) as it goes along, so on those terms it's worth a look. The acting and seemingly chopped out gore effects however leave a lot to be desired. Based on Russo's novel of the same name. Kevin Kindlin (REVENGE OF THE LIVING ZOMBIES) and Terrie Godfrey star.