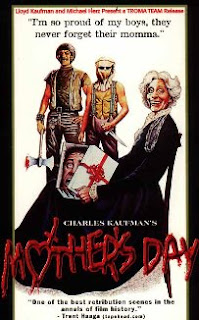 Directed by:
Charles Kaufman
Three former college roommates (Nancy Hendrickson, Tiana Pierce and Deborah Luce) reunite for an annual camping trip out in the sticks and reminisce about their long-gone college days, which are shown in comic flashbacks. Then, two mother-obsessed, deranged brothers; Ike ("Holden McGuire"/ Frederick Coffin) and Addley ("Billy Ray McQuade"/ Michael McCleery) attack them, drag them back to their isolated house in their sleeping bags, beat them and tie them up. One of the girls is taken outside, dressed like Shirley Temple, raped and beaten unconscious while the other brother takes pictures and the equally disturbed mother ("Rose Ross"/ Beatrice Pons) encourages them and laughs with glee. The next day, the three girls manage to escape into the woods, but the injured one dies and the two survivors vow to get revenge on their attackers and head back to the house for a blood-soaked finale. The colorful, over-the-top and somewhat inventive gore effects include a hammer to the crotch, a decapitation (complete with a blood squirting torso), a TV-to-the-head electrocution, electric carving knife attack and Drano poured down the throat.
.
Just like the majority of Troma's output, it's pretty tasteless (which can certainly be a plus depending on the viewer) and often annoying, but entertaining and creative enough to merit a view, with some successful attempts at satire and jabs at our commercialized world that, naturally, most well-touted critics seemed to overlook in their scathing reviews. The female leads are also a bit more fleshed out than usual for this type of film. The director is the brother of Troma head honcho Lloyd Kaufman, who was the associate producer of the film. Their sister Susan was the production designer and their father Stanley even gets in on the action, appearing in a small role during a pool party scene. Some of the locations were the same ones used in the original FRIDAY THE 13TH. In fact, the films were being made at the exact same time, just on opposite ends of the New Jersey lake.
.
Darren Lynn Bousman (the guy behind the SAW sequels and REPO! THE GENETIC OPERA - which I hated, by the way) is working on a remake as we speak.
★★1/2
Posted by The Bloody Pit of Horror at 1:32 AM