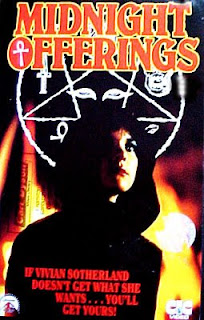 Directed by:
Rod Holcomb
Actress Melissa Sue Anderson (TV's "Little House on the Prairie") was so desperate to change her squeaky clean image that she played a psycho killer in the gory slasher flick HAPPY BIRTHDAY TO ME (1981) and then played a Satanic super bitch in this made-for-TV movie. At Ocean High School in California, Vivian Sotherland (Anderson) seems to always get her way. She's always on the honor roll. She's the captain of the cheerleading squad. She's Homecoming Queen. And until he let her down after a alcohol-related run-in with the law, she was dating David Sterling (Patrick Cassidy), the handsome and popular captain of the football team. The kicker is that Vivian is using witchcraft to get everything she wants out of life, and if a few people have to get hurt or die along the way, then so be it. Immediately after a biology teacher dies in a mysterious fiery car crash, a new girl - the sweet but inquisitive Robin Prentiss (Mary Beth McDonough, from "The Waltons") - shows up. She's an outsider, but immediately hits it off with Patrick. Even though they'd sort-of split up, Vivian isn't ready to let go, gets jealous and decides to keep her friends close but her enemies closer by causing an accident to get Robin onto her cheerleading squad. She also makes Robin's father (Peter MacLean) get ill and causes other problems for her. What Vivian didn't count on was a little competition - Robin is also a witch who has been trying to keep her powers dormant and live as normal a life as possible.

Vivian's not only doing things to boost her own academic career and popularity, but she's also doing things to help her parents (which in turn will naturally help her). Her mother Diane (Cathryn Damon) knows exactly what she's up to and even has powers of her own, but they're weak compared to her daughters because she never uses them. Father Sherm (Gordon Jump) is oblivious to it all, thinks that the Satanic chanting he hears from outside his daughter's door is her doing chemistry homework (!) and thinks the mother is jealous any time she voices any concern. Dad is also about to capitalize on an advancement at work after a colleague also in line for the position mysteriously (a-hem) keeled over from a heart attack. Vivian's suburban bedroom is hilariously decked out in burning candles, skulls and goats head pentagrams. She also has a black (cat) familiar she sends out to try to kill Robin by causing a fire, crows she sends to try to cause a car accident and a pet goat she talks her cheerleading squad into adopting as a mascot.

Patrick gets advice from paranormal expert Emily Moore (Marion Ross - "Happy Days"), who suggests Robin learn to use her powers before it's too late. And that's just what she does when Vivian becomes nastier by threatening to kill her if she doesn't leave her school and transfer to another.

A silly, yet highly entertaining, tele-movie, MIDNIGHT OFFERINGS offers up some amusing then-trendy teen lingo, a dash of cheesy romance and sanitized supernatural horror aplenty. The acting is decent enough, especially by Anderson, who has fun with her high school bitch queen role. The best scene is a psychic battle in the school's wood shop utilizing lumber, a nail gun, spray paint, various tools and even an electric table saw, and the high school setting and angst-ridden teen-witch dueling instantly brings to mind THE CRAFT (1996). In fact, the similarities don't really end there. There's even a forest montage where the good witch learns how to master her abilities! Keep your eyes peeled for very brief appearances from Dana Kimmell (the heroine from FRIDAY THE 13TH, PART III) and future game show hostess Vanna White (who also appeared in the slasher GRADUATION DAY that same year) as cheerleaders.

This film has yet to see the light of day on either video or DVD in America (at least officially), so you're most likely to run across it either online or on late night TV. Several bootleg sites offer it on DVD-R and it was released on VHS in the UK.
★★1/2
Posted by The Bloody Pit of Horror at 4:13 AM