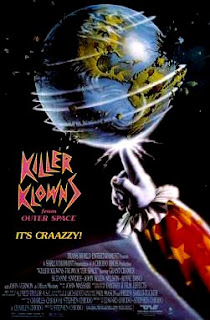 Directed by:
Stephen Chiodo
A twist on the alien-invasion theme and a knowing throwback to 50s sci-fi/horror flicks, this features blood-drinking alien clowns, of varying size and design, who land their circus tent spaceship in the woods near a small town. Victims are shot at with popcorn ray guns and are captured in balloons before being wrapped in cotton candy cocoons, where they're poked with a plastic straw and have all their blood sucked out! Yes, it's every bit as silly as it sounds but this actually works thanks to fun special effects, excellent designs on the alien clowns, colorful production design and many unexpected and clever surprises, many of which amusingly play up on the clown or circus theme. The Dickies provide a great and catchy title theme song. Grant Cramer (NEW YEAR'S EVIL) and Suzanne Snyder (RETURN OF THE LIVING DEAD II) star as the young couple who have a hard time convincing the local authorities about what's going on. Also with John Allen Nelson as a young deputy, John Vernon (playing one of his patented humorless bad guys roles as a sheriff who gets used as a human puppet), Royal Dano as an early victim and stand-up comedian Christopher Titus (remember his TV show?). This was a family project and labor of love for the Chiodo brothers (Charles, Edward and Stephen), who between them wrote, directed, produced and worked on the production design and special effects.
★★★
Posted by The Bloody Pit of Horror at 9:50 PM