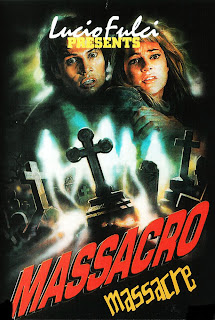 Directed by:
Andrea Bianchi
There are at least a hundred movies featuring a psycho killer invading a horror movie set and you can't really blame filmmakers for using this overworked plot line. It promises a fitting backdrop for a horror film, plus usually gives the killer props to use, and places to hide the bodies, and naturally all of the expected 'false scares' to fill time between the gore scenes. What's always struck me as odd is how instead of showing a horror movie set as a positive place where people are having fun, most filmmakers opt to show it in a negative light and fill their films full of characters who are nasty, bitchy, egotistical, backstabbing, oversexed jerks and Primadonnas. This one's no exception to that rule, though it does try to add some additional twists to the formula, ridiculous as they may be.
.
MASSACRE (which is "presented by" Lucio Fulci) opens with a guy in sunglasses attacking a prostitute with a hatchet and chopping off her hand before decapitating her (the goriest scene in the entire film), then immediately cuts to another woman waking up in a graveyard and stumbling into the middle of some black mass ceremony being conducted by hooded ghouls. The first murder turns out to be "real," while the second one turns out to be a scene in a movie being shot. That film's director, Frank (Maurice Poli), is fed up because he wants more realism and less fantasy, so he decides to rework the script and bring in professional psychic Irene Ullich (Anna Maria Placido) as an adviser. During a séance, Irene accidentally calls forth the ghost of a man named Jack, who she claims is a dangerous spirit that likes to cut people to pieces. Thinking nothing of it, the cast and crew go back to making the film and one by one begin getting killed off in bloody ways. Leading lady Jennifer (Patrizia Falcone) conveniently happens to be dating Walter (Gino Concari) the lead detective investigating the murders

There's a rumor on set that Jennifer is a lesbian because she's friends with the lesbian assistant director Mira (Lubka Lenzi). Sleazy producer Robert Arnold (Pier Maria Cecchini) tries to capitalize on this by threatening his heavy-drinking, unfaithful wife Liza (Silvia Conti), "You have 24 hours to get that lesbian in bed with us. Otherwise pack your bags and go to the $h1+house gutter." Also along for the fun are Gordon the scriptwriter, a couple of random hookers and makeup artist Jean (Robert Egon), who is also Liza's secret lover. Veteran horror star Paul Muller has nothing to really do as an obnoxious police commissioner in three brief scenes. The best character is Adrian (wish I knew the actor so I could give him his props), a flamboyant actor and female impersonator who treats us (in full costume) to some quick impersonations of Marilyn Monroe, Liza Minnelli and Marlene Dietrich. Don't know what that has to do with the rest of this film, but hey, I'll take what I can get.

Unfortunately, the murder scenes are mostly uninspired (the same weapon is used the majority of the time) or take place completely off-screen, though there's a decent enough body count and sufficient amounts of blood and T&A for one of these things. Some pacing problems here, too, as the majority of the cast gets killed off after the one hour mark in very rushed scenes. There's also unneeded plot complication as a second killer (who is completely unrelated to what's going on on the movie set) turns up to try to throw police off. And I think they wanted the revelation of the main killer to be a surprise, but it's pretty obviously telegraphed ahead of time during the séance scene.
★★
Posted by The Bloody Pit of Horror at 4:07 AM