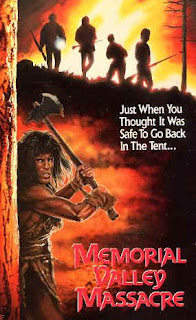 ...aka: Memorial Day
...aka: Valley of Death
Directed by:
Robert C. Hughes
Here’s a spirited little low-budget movie from the late 80s, coming from complete video obscurity to wide release on many horror DVD multi packs. It's far from sheer slasher perfection and is pretty forgettable overall, but it's entertaining while it lasts, there's plenty of energy and an adequate massacre. A parade of cars, trucks, RVs and campers signal the opening of the new Memorial Valley Campground and Wilderness Area, cut deep the California wilderness and spearheaded by ruthless developer Allen Sangster (Cameron Mitchell, in a cameo), who has sunk a huge chuck of change into transforming the once tranquil area into a place of big business, with a shopping center, ski lodge, condos, etc. The construction crew decides to bail when a crewman mysteriously dies and a dead dog turns up in a well, but they open the place up to the public anyway, with no running water or restroom facilities. Allen's college-age son David (Mark Mears) shows up out of the blue for a summer job and gets on the bad side of harried head ranger George (John Kerry, no not that one), who's already stressed out enough as it is. So anyway, a variety of different people roll in... and start dying one by one. The murderer responsible turns out to be a filthy, long-haired, spear-chucking primitive cast-off dressed in animal furs who's been surviving out in the woods all by himself ever since he was a child.

It's pretty obvious the makers of this movie were very pro-environmental conservation and in a strange way the cave-dwelling killer is the walking, grunting personification of mother nature fighting back. One of the first victims is an obnoxious, obese kid who refuses to abide by the "no motorcycles or ATVs allowed in the park" rule and takes his four-wheeler out for a pollution-spilling spin. He's clothes-lined off his bike with a vine and has his neck snapped. Hope you enjoyed it because it's the only on-screen death for about the first hour. But there's a wide variety of other characters waiting around who are ripe for the picking off; the tacky suburbanite parents of the slain kid, three loud death-metal listening horny teens, six bikers (refreshingly two are black, three are women and most of them are pretty cool), a pretty female college student (Lesa Lee) who gets hooked up with David and many others. William Smith has a funny role as grizzled, booze-swilling ex war vet General Mintz, who's blown up inside his camper with his bubbly wife Pepper (Linda Honeyman).

Some victims are killed with various booby-traps, like a pit of spears a guy gets impaled on. There's an axing, some stabbings, a torching, three people crushed when a bulldozer pushes a truck down a hill on top of them and more. It's not all that gory per se, but the body count is high enough. I don't see anybody in this cast going on to win an Oscar anytime soon, but I still liked most of the amateurs they used. Especially good are Mears, who is genuinely talented and appealing in the lead (can't understand why he didn't do anymore film work after this) and Jimmy Justice, who's pretty charming as the camp caretaker. It was also a nice surprise to see 80s-90s cheese movie vixen Karen Russell (from MURDER WEAPON, TENEMENT and many others), using the alias "Dusty Rose," as a biker chick. Like I said, it's silly, flawed and far from a genre classic, but I still liked it.
★★
Posted by The Bloody Pit of Horror at 4:19 AM