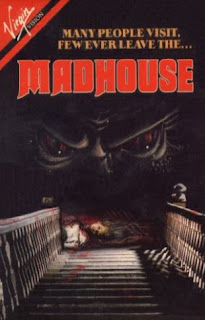 ...aka: And When She Was Bad
...aka: Flesh and the Beast
...aka: Scared to Death
...aka: There Was a Little Girl
Directed by:
Ovidio G. Assonitis
Pretty blonde schoolteacher Julia Sullivan (Trish Everly) specializes in helping deaf children but is plagued by childhood flashbacks of the torment she suffered from her insane twin sister. The sister, who suffers from a rare disease that disfigures her face, escapes from an asylum and kills people to prepare for the climactic warped birthday party. Things start off pretty well, with a disturbing opening sequence, decent performances from a mostly unknown cast, a few scares and some suspenseful murder sequences, but the ending is a major letdown and, annoyingly, no one seems to really care or notice that the sister is on the loose and that people are being murdered. Nonetheless, it's attractively photographed and is a major improvement over director Assonitis' two previous horror films: the moronic EXORCIST rip-off BEYOND THE DOOR (1974) and the JAWS wanna-be TENTACLES (1977), which at least featured a giant octopus instead of a shark. He used the alias "Oliver Hellman" for the film and also co-wrote and co-produced. The music is by Riz Ortolani and the cast includes Michael MacRae, Dennis Robertson, Morgan Hart and Edith Ivey. Originally titled THERE WAS A LITTLE GIRL. The US video release didn't come until 1987.
★★
Posted by The Bloody Pit of Horror at 3:31 AM