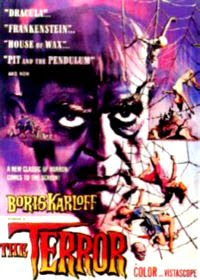 ...aka: Castle of Terror, The
...aka: Haunting, The
...aka: Lady of the Shadows
Directed by:
Roger Corman
Francis Ford Coppola (uncredited)
Monte Hellman (uncredited)
Jack Hill (uncredited)
Dennis Jakob (uncredited)
Jack Nicholson (uncredited)
Yes, it's the legendary film shot in just a couple of days (either 2 1/2 to 4 depending on your source) on leftover sets from THE RAVEN and THE HAUNTED PALACE and with Boris Karloff still under contract for two days work for director/producer Roger Corman. The so-called "plot" (devised by writers Jack Hill and Leo Gordon, which I strongly suspect was made up as they went along) involve one of Napoleon's lost soldiers, Lt. Andre Duvalier (a badly miscast Jack Nicholson, giving a performance nothing short of terrible) chasing down a beautiful, ghostly woman he sees on a beach (played by Jack's then-pregnant former wife Sandra Knight) to the castle home an insane Baron von Leppe (Karloff); the mysterious woman's supposed husband. Corman regulars Dick Miller (as Leppe's manservant Stephan) and Jonathan Haze (as Gustan the hermit) show up to contribute to the confusion. Legend has it that up to five other directors (Francis Ford Coppola, Monte Hellman, Hill, Dennis Jacob and even Nicholson himself) worked uncredited and shot separate scenes for this extremely disjointed but somewhat interesting little film. That it is able to muster up some genuine atmosphere (especially scenes shot along the California coastline) is a testament to the Corman stable’s underrated talent, though the film is mostly enjoyed now as a curio item for film buffs.

That same year, Corman employed Coppola to write and direct a PSYCHO derivation in Ireland (DEMENTIA 13), which became a cult item itself. Scenes (and outtakes) from THE TERROR have been reused many times in other Corman productions, most notably as the film screened at the drive-in in Peter Bogdanovich’s debut feature TARGETS (1968), also with Boris in a starring role. Director Jim Wynorski also cleverly inserted a scene of Karloff into his amusing 1989 horror spoof TRANSYLVANIA TWIST.
★★
Posted by The Bloody Pit of Horror at 12:20 AM