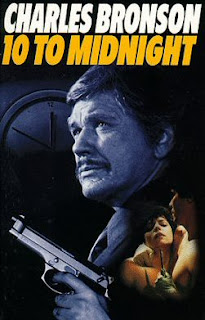 We’ve all seen numerous 80s teen sex comedies featuring streaking. Here’s an 80s psycho-horror-thriller about streaking sex killer. He (Gene Davis) is stalking, raping and murdering young ladies on a California college campus. The culprit is evident to L.A. cops, but the psycho is intelligent enough to avoid leaving behind any evidence, so tough police lieutenant Leo Kessler (Charles Bronson) helps in planting evidence so he’ll be arrested. At trial, the case is thrown out, the nut is set free and Bronson is kicked off the force. But when his coed daughter (Lisa Eilbacher) becomes a target, Bronson must step back into action, go the DEATH WISH route and track down and eliminate the killer on his own. Despite the content (which was influenced by both American serial killer Richard Speck and the Thames River Killer investigation in the UK), it’s only a very slight deviation from the norm for the star (by genre, not character). Livened up a tad by a pretty good cast and a larger-than-usual amount of nudity (both male and female).
With Andrew Stevens (a long-time exploitation actor who went on to a successful career as a producer) as the daughter's boyfriend, Geoffrey Lewis, Wilford Brimley as a police captain, Robert F. Lyons (who played a psycho in 1971's THE TODD KILLINGS) , Ola Ray (a former Playboy Playmate who is best known as the girl in Michael Jackson's Thriller video), Kelly Preston (aka Mrs. John Travolta), Jeana Tomasina (another Playboy model who'd later show up with a few extra pounds on the reality show The Real Housewives of Orange County), Jeane Manson (the third featured Playmate who went on to a huge singing career, selling over 20 million albums worldwide), future director Deran Sarafian (ALIEN PREDATORS, TO DIE FOR), Anne Lockhart (daughter of June) as a victim and some other familiar faces.
★★
Posted by The Bloody Pit of Horror at 12:02 AM