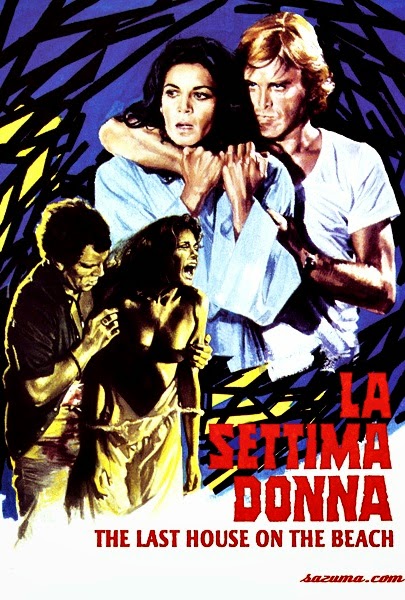 
The 1972 shocker The Last House on the Left (itself "inspired" by Bergman's 1960 Best Foreign Film Oscar-winner The Virgin Spring) was such a popular and notorious film during its day that it spawned a whole slew of wannabes, impostors and imitators, particularly in Europe. Some of these movies were actually rip-offs, while others merely tried to cash in on the familiar title but actually had little else in common with Craven's film. At one point, distributors even tried to pass off Bava's Reazione a catena (aka Bay of Blood), filmed a year before Craven's film, as a sequel! There was also the psycho road thriller "Hitch Hike: Last House on the Left" (better known as simply HITCH HIKE), "The New House on the Left" (aka Night Train Murders), House on the Edge of the Park (1980), LAST HOUSE ON DEAD END STREET (1977), TERROR EXPRESS (1979) and many others. The formula was pretty simple - have a group of criminals / thugs / killers / psychos take a random group of people (normally women) hostage and proceed to humiliate, abuse, terrorize, rape and / or kill some of them off before allowing the survivors to turn the tables on their attackers and get revenge... or let someone else do it for them. And that brings us to director Franco Prosperi's 1978 cash-in Last House on the Beach, which was originally filmed as La settima donna ("The Seventh Woman") and was also released under the more generic title Terror. It follows the above formula pace-for-pace, plot-point-for-plot-point and though it's watchable for the most part, it brings absolutely nothing new or all that interesting to this subgenre.

Florinda Bolkan (who is too talented to be appearing in rip-offs such as this one) stars as Cristina, a teacher and sister-of-the-cloth who is spending an extended weekend at a remote beach house preparing for a Shakespeare performance with five female students. Elsewhere, three thugs; Aldo (Ray Lovelock), Walter (Flavio Andreini) and Nino (Stefano Cedrati), have just robbed a bank and left several dead bodies in their wake. They end up needing a place to hide out for a few days and stumble upon the beach house, where they quickly murder the maid (with an iron to the head) and take Cristina and her nubile students hostage. From then on out, the films plays out basically as a series of sexual humiliations, gropings, beatings, attempted rapes and actual rapes. The captors do such nice things as making Cristina strip and change into her nun's habit in front of her students, sticking their hands down the girls panties to see if they're still virgins and forcing Cristina to watch one of her students get bent over and raped (in slow motion, no less). The guys finally send Cristina over the edge when they rape one of the more "troublesome" - though still virginal - girls, Eliza (Sherry Buchanan), to death with a cane. The final revenge exacted by the surviving women is almost as bland as it is predictable.

Though numerous scenarios play out in an unpleasant way, the film isn't nearly as harrowing or impactful as it should have been. One reason is the stereotypical obnoxious portrayal of the three bad guys, which is so frequently over-the-top and one-dimensionally sleazy that it detracts from the overall realism of the film. Another is the portrayal of the anonymous wide-eyed schoolgirls, who aren't allowed even a glimpse of individual personality. These are simply evil oversexed bad guys versus virginal cowering good girls of the cardboard cut-out variety that don't make one care much either way about what's going on to whom at any given time. Bolkan helps out the best she can. She's the type of actress who is able to convey a lot in a subtle, quiet way - minus the hysterics - and she did a fair job contrasting the obnoxious male attackers.

So while this film is basically a lesser copy of something better (and even sits in the shadow of some of the other lesser imitations), it's still fairly well-scored and photographed for what it is. The beach house itself is a pretty good setting, and there's enough nudity, sleaze and sexual violence directed toward underage-looking teenage girls for those wanting to see that. Personally though, I can't say that I was all that impressed. There aren't very many suspenseful or thrilling moments, just lots of tedious attacks scenes leading to a predictable and ho-hum finale.