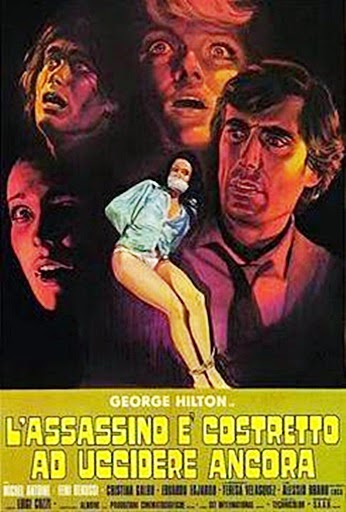 
Faithless slimeball Giorgio Mainardi (George Hilton) catches a ruthless serial killer (“Michel Antoine” / Antoine Saint-John) in the act of disposing of a corpse of someone he's just killed and blackmails him to kill his wealthy wife Norma (Teresa Velázquez). The murder is committed and then things spiral completely out of control after a key piece of incriminating evidence (the body!) disappears. Turns out the corpse was in the truck of a getaway car, and said car has just been stolen by a punk named Luca (Alessio Orano) and his naive virginal girlfriend Laura (Cristina Galbó). The couple drive a way to a crumbling old house by the ocean, the psycho trails them there and then decides to have a little fun before killing them. Laura is raped, a blonde airhead (Femi Benussi) ends up at the house after her car breaks down and people start dying. Not a bad little brutal crime thriller with some decent suspense, a little blood, some nudity, a couple of nasty attack scenes and an effective performance from Saint-John (who played the artist who gets crucified and dissolved by acid in the opening scene in The Beyond) as the psycho. On the down side, the dialogue (as per the subtitles) isn't the best, some attempts at being stylish are silly (i.e. the tollbooth scene) and most of the female characters are needlessly irritating and whiny. There's a decent twist at the end. Umberto Lenzi was one of the producers and Edjuardo Fajardo co-stars as the inspector on the case.


This is normally labeled a giallo. I've even labeled it a giallo in my keyword search. However, going by the standard definition I always see (which states that a "literary whodunit element" - like in the yellow-covered paperback novels this film sub-genre is derived from - must be retained) this hardly qualifies as such. There is no mysterious black-gloved killer running around, there are no red herrings or suspects and, most importantly, there isn't even a mystery to solve here. We know what's going on, why it's happening and who's doing it all right from the beginning. Instead, this is more in tune with dozens of other Euro horrors inspired by Craven's Last House on the Left. These films feature a psycho or group of psychos / criminals holding people hostage, where the victims are humiliated, usually raped and threatened with violence and death, which is exactly what the bulk of this film is comprised of. Someone really needs to come up with a term for those.


And I don't even know about giallo as a subgenre. Since half of the films carrying the label don't even fit the definition it seems the term is around simply because it's easier to say and sounds cooler than "Italian horror."