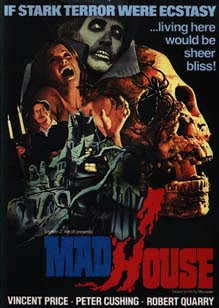 ...aka: Deathday
...aka: Madhouse of Dr. Fear, The
...aka: Revenge of Dr. Death, The
Directed by:
Jim Clark
Veteran horror star Paul Toombes (Vincent Price) thinks his career is going to be revived when he's asked to reprise his "Dr. Death" character for an upcoming British television production. A jealous, skull-masked killer thinks otherwise and sets out to frame him for a series of nasty murders. Not-bad British horror has some effective scenes, some imaginative murder scenes and a very knowing, self-referential performance by Price, but goes uncomfortably over-the-top toward the end. Clips from many earlier Price films, such as PIT AND THE PENDULUM (1961), TALES OF TERROR (1962) and THE RAVEN (1963), are used and Boris Karloff, Basil Rathbone and others can be seen in that footage. Excellent supporting cast - Peter Cushing as a screenwriter, Adrienne Corri as a former actress disfigured in a fire, Robert Quarry as a sleazy movie producer, Linda Hayden as an early victim - helps. Adapted from Angus Hall's novel "Devilday."
★★1/2
Posted by The Bloody Pit of Horror at 3:18 AM