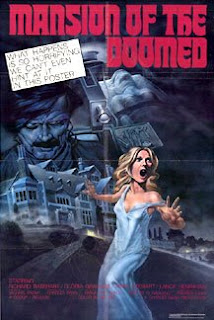 ...aka: Eyes of Dr. Chaney, The
...aka: Eyes of the Living Dead
...aka: House of Blood
...aka: Massacre Mansion
...aka: Terror of Dr. Chaney, The
Directed by:
Michael Pataki
Busy character actor Michael Pataki took a break from appearing in films like GRAVE OF THE VAMPIRE and THE BAT PEOPLE to step behind the camera and direct this fairly well made, yet forgettable, PG-rated Charles Band production. Richard Basehart is ranting, deranged surgeon Dr. Leonard Chaney who feels responsible for the car accident that blinded his pretty daughter Nancy (Trish Stewart). With the help of his faithful assistant Katherine (former film noir regular and Oscar winner Gloria Grahame), he drugs people, takes them to a secret operating room (located inside his own home!), removes their eyes, transplants them onto his daughter and locks the victims in a cage in his cellar. After many unsuccessful attempts to restore his daughter's sight, a ready-made mob of miserable, eyeless people wait to get their revenge. There are some effective and grisly make-up effects by "Stanley" Winston and pretty good performances from Basehart, Grahame and Lance Henriksen (in an early role playing Stewart's doctor love interest who becomes the first victim) to keep this watchable, but the dark photography (by Andrew Davis, who went on to direct THE FUGITIVE), ludicrous plotting and a dead serious approach make for a pretty depressing and unenjoyable viewing experience.
.
Albert Band (Charles' father) gets a credit for "executive supervision." With Vic Tayback (Mel the diner owner from TV's "Alice") as a detective, Donna Anderson, Marilyn Joi and Arthur Space as a wino. Many of the cast members appeared in DRACULA'S DOG (1978; aka ZOLTAN: HOUND OF DRACULA), also from the Band father-and-son filmmaking team.
★★
Posted by The Bloody Pit of Horror at 3:03 AM