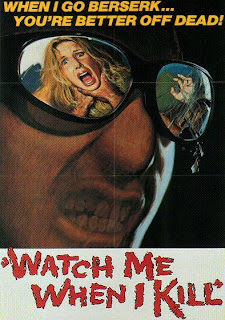 ...aka: Cat's Victims, The
...aka: Cat with the Jade Eyes
...aka: Watch Me When I Kill
Directed by:
Antonio Bido
Most fans of 1970s Euro horror know just what a giallo is; a horrific murder mystery usually from Europe (specifically Italy, but not always) involving screwy plot mechanics, colorful - gory death scenes, enough red herrings for a large dinner party and a gloved killer whose identity basically comes out of nowhere at the end. Antonio Bido borrows heavily from giallo masters Mario Bava and Dario Argento (there's even a copy Goblin score), but completely lacks the imagination and directorial flair that really gives this form of filmmaking its juice. The plot involves a Nazi death camp survivor in Rome who starts killing people somehow involved with the deaths of his family. Mara ("Sylvia Kramer" aka Paola Tedesco) is a lovely singer/actress/innocent bystander who gets caught in the middle after witnessing one of the murders. She teams up with her detective boyfriend Lucas Karman ("Richard Stewart" aka Corrado Pani) to solve the mystery. Note (this is referring to the original VHS version I saw and not the DVD that was released recently): There's no nudity, very little violence (other than a slashed neck and a face boiled in a pot of stew) and not enough clues to give any viewer a fighting chance at solving the crimes before our heroes do. The American release (from Herman Cohen in 1981) has no credits for writer, producer or supporting cast. With Paolo Malco.
★★
Posted by The Bloody Pit of Horror at 11:29 PM