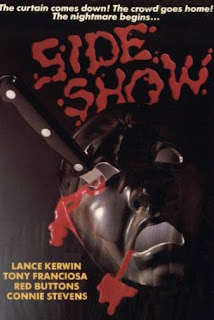 Directed by:
William Conrad
Sixteen-year-old Nick Pallas (Lance Kerwin of SALEM'S LOT and James at 15 fame), the son of a famous puppeteer, wants to carry on in his dad's footsteps, drops out of school and gets hired on as a puppeteer at another circus that travels around the country by train. Friendly carnival barker Harry (Red Buttons) instantly takes him under his wing, shows him around and introduces him to his new "freak" co-workers. There's a giantess, a pair of dwarfs, a female living torso (with no arms and legs), a 500-pound woman, a tattooed woman (who has famous paintings and landmarks tattooed on her body), a snake woman, a gay sword swallower, a masked man with a disfigured face and others. Also working there are over-the-hill female aerialist Graciela (Connie Stevens, attempting a Hungarian accent) and womanizing lion tamer Zaranov (Anthony Franciosa). There's some major animosity between cruel circus manager Mr. Scholl (Albert Paulsen) and janitor/handyman Bryon Gage (William Windom) over an accident that happened years earlier that left Scholl with a crippled leg and led Byron down a path of alcoholism and circus geekdom (biting the heads off of live chickens).
Directed by William Conrad (of Jake and the Fatman fame) and produced by Sid and Marty Krofft (of H.R. Pufnstuf fame), this was filmed in 1978, but held back for release until 1981, when it debuted on NBC. There was a video release from Trans World Entertainment back in the 80s whose box art featured a scary black mask with a knife sticking in it and the title written in blood. Not really knowing how to classify this film, it looks like TWE wanted to promote this as a horror film when in actuality it's more of a coming-of-age drama. The circus serves as a backdrop to prepare our virginal young protagonist for life as he basically experiences it all (friendship, love, sex, death, etc.) in his first few weeks there. During the final twenty minutes, it unwisely tries to be a thriller. There's a suicide, several revenge-motivated murders and a scene of agitated lions attacking the lion tamer, but these scenes seem rushed and tacked on for no real purpose other than to add some action and excitement into a film that doesn't really need it. As a result, many of the character relationships that were built up during the first hour of the film seem to go right out the window. The feel-good finale also rings false with the dark tone of the rest of the film.
It was clearly inspired by Tod Browning's classic FREAKS; the "freaks" by and large seem to be the nice, well-adjusted and accommodating ones, while the "normal" people are the ones with the major hangups, problems, addictions and murderous impulses. Though uneven throughout, there are some nice moments here and there. Jerry Maren (who played the munchkin who hands Dorothy a lollipop in THE WIZARD OF OZ) and Patty Maloney as the dwarf couple who are reunited with their normal-sized son, daughter-in-law and grandchild, Barbara Rhoades as the world-weary tattooed lady and 7'7" Sandra Elaine Allen (the "world's tallest woman") have the best bits. Kerwin gives a sincere lead performance too, even when having to participate in an embarrassing seduction scene with Mrs. Stevens and seemingly having every full-grown woman trying to get into his jailbait pants.
Filmed at Circus Vargas, so you get all kinds of authentic circus acts, such as high wire routines (including one with a dog), a konga line of chimps, elephants spinning in circles and such.
★★
Posted by The Bloody Pit of Horror at 2:09 PM